gravel riding before it was a thing 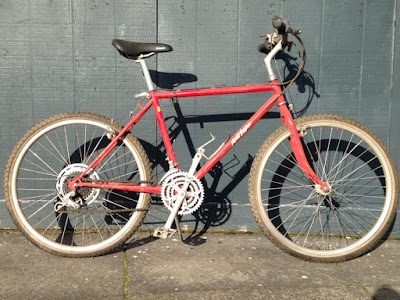 I recently received this 1986 Specialized Rock Hopper. At first blush it looked like it had potential.
Almost entirely original parts, including Tommasini grips, Shimano BMX platform pedals and a Shimano "deerhead" shifter (sadly, only one and not a complete pair).

I had hoped to turn this into something I could either sell or keep and ride. (It's a rare vintage mountain bike in a smaller size.) 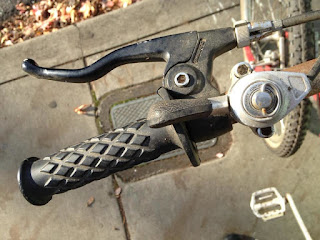 The bike came with original tires.
The rear tube wouldn't hold air, so I went in to investigate. I was more than a little surprised at what I found. 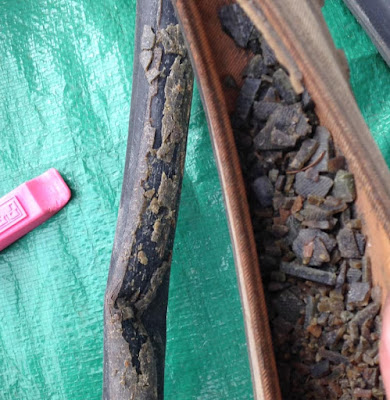 I had hoped to find one or two holes that I could patch, and save the tube.

That's gravel inside the tire, which of course poked so many holes in the tube that there was no point in trying hard to save it.

Upon closer inspection, I discovered that  the crumbly stuff stuck to the tube had once been a tire liner. Did the gravel roll around in there and destroy the liner? Or did exposure to the elements do it? 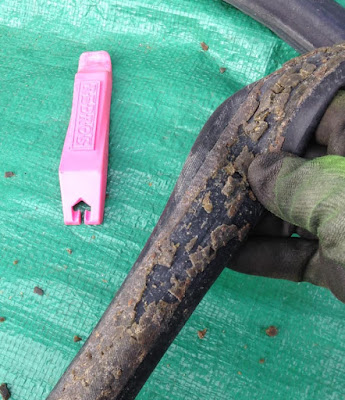 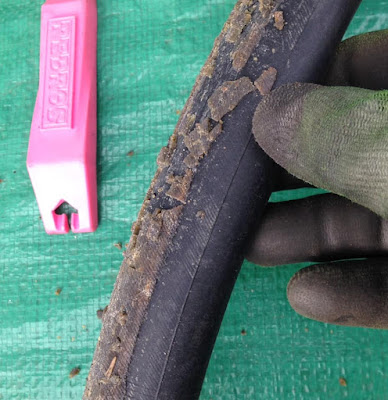 This bike had spent perhaps decades sitting under a carport, and had collected a fair amount of rust on anything made of steel.

Getting further into the bike, I discovered that the eyelets on the front rim were beginning to show tiny cracks here and there -- nothing fatal as yet, but enough to indicate that this bike had been ridden awhile before being put away.

I just can't believe that anyone tried to ride this with all that gravel in the tire.

At this level of use and aging it's likely going to become another refugee bike.
It's pretty old and cool in its own way; but the components are too worn for this bike to be of much value to a collector. It will be better off getting ridden by someone who needs a bike. So now I'll need to figure out which parts are worth removing and replacing with more basic, functional stuff. I will probably try to find a mater for that shifter and use it one one of my bikes (The stem shifters I adore so much on my All-Rounder are wearing out and I'm thinking of going to top-mount thumbies).

Meanwhile, I've got a couple more bikes after this to fix up for folks in need.
And I'm still gratefully taking any and all functional locks, lights, bags and racks if you have any to spare.
Thanks, and happy riding!