should cost-effectiveness be such a strong consideration?

A bike came in as a donation that had me pretty excited. It was a very tall vintage Peugeot mountain bike, a 21" Montreal Express with a step-though frame. Tall step-through frames are awesome, and I'm sorry that more companies haven't made them.

Sadly, the bike had serious frame issues that required me to strip it of all its parts.
The seat stay had broken loose where it had been brazed to the seat tube, and strangely, the rear brake bridge was missing. It had been sawed off.

So I checked around among my framebuilding contacts to see if any of them would be willing to do a quick and dirty frame repair on the down-low; that is, I didn't care about cosmetics and would not identify the builder. One builder stepped up, presumably because she's leaving town soon for grad school and wouldn't have to worry if word got out. (It won't.)

I was thrilled with the repair and did a quick rattle-can paint job on the parts that had been filed and brazed. After it dried I was ready to rebuild the bike. 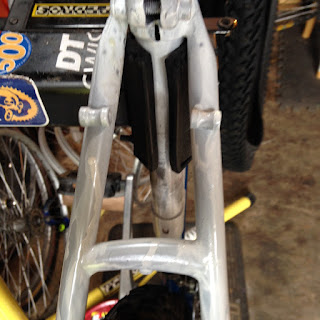 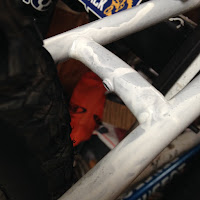 In the process of rebuilding this bike, I came across a few small issues that I would have to resolve using what I had on hand. While I do stock spare parts, they mostly come from other donated bikes whose frames were damaged beyond repair. I don't generally buy new tires since they're expensive and I'm on a pretty tight budget these days. So when I noticed that a tire I'd chosen for this bike has a small split in the sidewall but also had a really good tread, I chose to save the tire.

I made a boot by cutting up a bit of inner tube, cutting two patches to size and affixing them to both sides of the sidewall with a little super-glue gel. It worked fine. 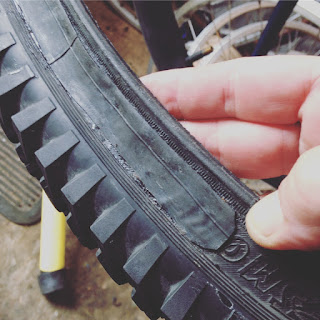 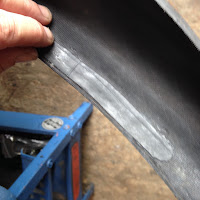 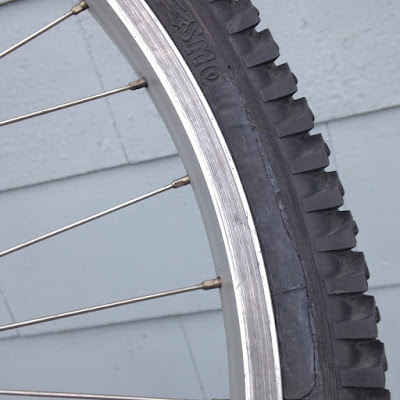 Along with this issue, there was also the matter of finding a seatpost binder bolt that would fit the hole. Although Peugeot was a french brand and its older bikes were built to French industrial standards (which didn't work with anything else), some early mountain bikes from Peugeot were marketed to the North American market, and made along Japanese/English standards and accepted a wider variety of components. This was one of those bikes. But it retained an odd-sized seat bolt, which I was lucky to have in my parts box.

In rebuilding a bike from odd parts, one solution can lead to another problem.
My oddball seatpost binder bolt was too fat to accommodate my standard cable stop which would hang from it. So I had to come up with another solution to have a cable stop for the rear brake.

Poking around in my parts boxes, I came across an old style of cable stop that was designed to wrap around a chain stay. I had several of these, so I decided to take one and see if I could use it up above the rear brake. 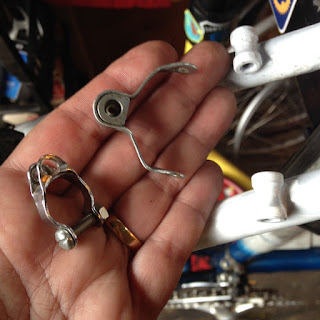 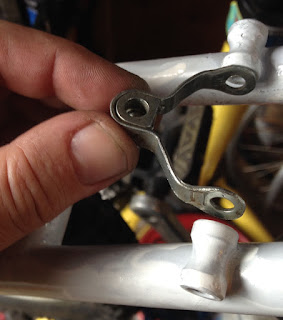 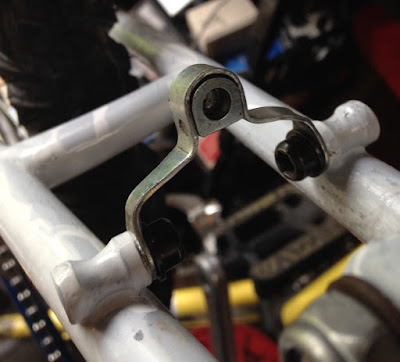 My hunch was a lucky one. Carefully using needle-nose pliers to bend the cable stop bands apart and reshape them, I was able to make this work between the rack eyelets.
However, I didn't have a short enough bolt that would allow me to use the eyelet for both the cable stop and to attach a rear rack. So I went with the shortest bolts I could find, and attached the cable stop between the eyelets. If I can come up with a few very short bolts later I can replace these and add a rear rack. If not, I'll install a front basket I have on hand, and call it good.

In considering how to rebuild an old bicycle, Cost seldom comes into it. Most of my bikes are donated or obtained at very low cost, and I'm a hobbyist fixing up bikes at home; so my overhead is almost nonexistent.

For a shop owner who must make a profit on everything sold, cost-effectiveness comes into question on every bike serviced, or built up for sale.
At home, I can strive for as much sustainability as I want, which is why I had no reservation about paying a friend to effect a repair on a broken frame that was in otherwise fine shape. If the cost of the repair had matched or exceeded the value of the bike I would have skipped it, and built up another frame into a bike. But the cost was low enough (a favor from a friend) that I decided I could afford to spend the money.

When I began working in the bicycle industry in 1994, I learned how to service bicycles that had components made entirely of metal -- which themselves could be serviced. Derailleur springs could be replaced. Caliper brakes could be completely dismantled, and center bolts swapped to turn a front brake into a rear one, or to lower a short-reach brake to reach the rim. And while today's high-end parts can still be serviced this way, the majority of components in the middle and entry-level price ranges are meant to be thrown away when they break, replaced with a brand-new component.
It's not sustainable, but in an industry where time is of the essence, it is far more cost-effective, and the default standard in the industry.

This decrease in sustainability is why I would never apply to work in a regular bike shop again, and why I much prefer the wrenching I do now -- fixing old bikes up to be ridden by folks on tight budgets, who won't be as fussy about a bike's age or appearance as long as it's safe and fun to ride.
I don't expect my choice to make a dent in the behemoth that is the bicycle industry, especially right now when bike mechanics are essential workers and bikes are in high demand. But I'm comfortable with my decision, and feel like the kind of wrenching I do these days is more in line with both my ethics and my creative approach to problem solving.

NIce post Beth. You sure do know everything bike! I for one appreciate your skill and your drive for using and reusing all that is possible. You do great work.

Nancy and Annie -- thanks!
I get a lot of pleasure in fixing up old bikes that require special problem-solving.
It challenges me to think outside the box, and outside industry norms designed to maximize profits.
I've always had an ambivalent relationship with bicycle retail, in spite of the 20-plus years I spent in the industry. The level of acceptable waste always disturbed me. So in my post-industry bike wrenching "career" I've made a point of resurrecting cheap bikes and making them fun to ride again.

I like your approach, and its great to see the bikes recycled and in use again. In Cardiff we have a local authority backed bike shop that trains people, repairs bikes and also recycles bike for resale. Thanks.