The cycling scene has grown ridiculous.

Since regaining enough energy to enjoy short bike rides again, I’ve also been slowly getting back into my wrenching groove. I’ve started working my way through the stack of old bikes out back, fixing them up and beginning to move them along. I have nearly all the spare parts I need, but now and then I go looking for a part online.

Lately, I’ve come along old parts I used to have on one of my bikes, or that I used to sell for cheap.

Rivendell used to sell this Simplex front derailleur in its catalog. 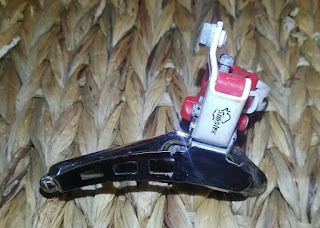 The derailleur was simple and worked well.. I liked it because it could be made to work with either double or triple chainrings and it was basic and sturdy. And because it was relatively uncool at the time, Rivendell bought a case of them and sold them for six bucks each. I bought two, and put one back “just in case”. (Admittedly, this is something a lot of iBOBs and Riv owners have done over the years, because if something is simple and affordable, we’ve learned that the bike industry won’t keep it around for very long.)

The first Simplex went on my Rivvy and worked like a charm for five years of heavy-duty commuting and mini-touring. Then one day, the red plastic half of the clamp began to show cracks. I figured I had a few months before it would fail and I’d have to swap in the second one, and I was right. The second one lasted almost seven years. By then, Rivendell had long ago sold its last Simplex front derailleur, so I ended up installing something else.

The derailleur showed up today on eBay. For sixty bucks. That’s ten times what it cost in 2002.

Honestly, I expect inflation to take its course. But ten times the original price for an old, nearly obsolete part seems a bit much, and I’m speaking as a former bike shop inventory manager. That’s a derailleur we would have had in a bucket on closeout at my old shop.

It gets better. I’ve subscribed to the iBOB listgroup for years, following discussions with varying degrees of interest depending on what else has been going on in my life. I barely followed it over the last couple of years, but with returning energy to ride bikes, I began following it again. And what I found was downright wacky. Discussion topics now range from “gravel” bikes to 12 x 1 drivetrains, with a significant side trip into carbon-fiber frames.

The same thing that has happened to the larger bike scene while I wasn’t paying attention:

— carbon frames (even in the pages of Bicycle Quarterly)

— 650b tires taking over the world, with a small but vocal pushback from those who insist “26 ain’t dead”

Things run in cycles, I know that. And I know that the current cycle in the bicycle industry will run its course, and the industry movers and shakers find The Next New Thing to trickle down from racing and entice the non-racing masses. Rivendell has made a great case for “regular” bikes (while at the same time selling non-custom whole bikes for more than I paid for my fully-custom frame set in 1998) and that’s a good thing. But no one deep inside the industry is really talking about sustainability the way I want to talk about sustainability.

I want to get people excited about fixing their own bikes, and getting their hands a little dirty, and to take control of their bikes by learning to do the sim0e things themselves. I want bike shops to be more enthusiastic about helping folks really own their own bikes by supplying new and used parts for older kinds of bikes to keep them on the road longer. I want the bicycle industry to stop glamorizing racing as the be-all, end-all just to sell fancy, high-end parts that don’t hold up in the real world.

I know that won’t happen anytime soon, not until we truly run out of old parts and the new ones fail so quickly that shops and manufacturers can no longer keep up. But a gal can dream.

I think a ride is in order this afternoon.

Posted by bikelovejones at 11:47 AM

Beth, what you wish for is happening here in Burlington Vermont at Old Spokes Home. Volunteer nights to tear down bikes for parts, rebuilding bikes for low income folks who need to understand their bikes. I went in there last weekend. My son rummaged through copious boxes of used parts...shops and community like this does exist with low investment.