It was cold and clouds threatened. Still neither of us wanted to spend the day just sitting around. So after errands, we went for a neighborhood ramble in the Fremont neighborhood of NE Portland, on the edge of Irvington. Houses here are older, mostly built between 1910 and 1940 or so, and most have generous front porches (something our poorly-remodeled house lacks) and sit fairly high above the street.

There was something cool around every corner. Today I noticed lots of things having to do with animals, including three or four artsy chicken coops from reclaimed materials (urban chickens are big here) and a couple of random bits that were worth photographing. 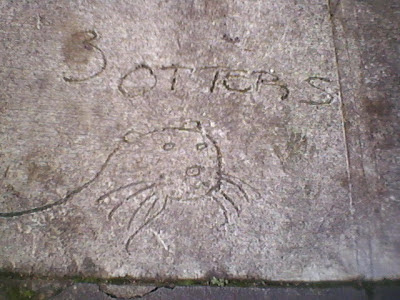 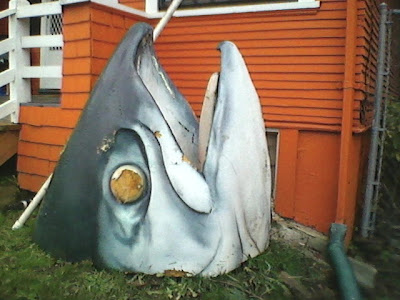 This fish head appeared to be made of heavy, closed-cell foam and stood nearly as tall as me. (The downspout gives you an idea of scale). Sweetie and I had no clue as to where it might have come from, or why; but it was easily the highlight of our lovely meander.

Tomorrow and Monday I am hoping to get in some good bike riding to end the year. Tomorrow will probably be the more ambitious of the two days, and I'm strongly considering a ride up to either Rocky Butte or Powell Butte in order to go someplace high and see far away before the calendar year closes out. Monday will probably be a more leisurely ride around the east side. In any event, I know I will crack the 2,300 mile mark this year. I had set a goal of breaking 2,500 but did not train or race enough to assure that. If I can get out both days I may approach 2,400.

I will submit a tally sheet (converted to kilometers) to C-KAP for the year. The way things are going for that organization, this may be the last year I submit anything to them. The guy who's been running the organization and doing all the record-keeping is in his seventies and has been unsuccessful in finding a successor; they also have picked up fewer than a dozen new members this year. Both are signs that C-KAP may have outlived its usefulness. I have earned all the incentives I can earn with C-KAP for the foreseeable future; my incentives nowadays are less tangible but no less satisfying. Still, keeping track of my mileage for personal reasons remains a good idea and I will continue to tally my miles here at home.

Assuming I stay in town all summer, I plan to race the full short-track series in 2013, likely the only racing I will do. There is the vaguest possibility that I may get hired to do a three-week teaching and music gig out of town in June. If that happens, my short-track season will consist of four weeks at most. As I have no other employment lined up for the summer I'd like to get this gig. However, the synagogue in question does not have any budget planned for this summer program and so it's unclear how they would be able to pay me the stipend and expenses I'd need for this trip to be worth my while. I am going to wait until February and then see where things stand. If nothing is clear by then I will assume that I'm spending the whole summer in Portland, and plan my race season accordingly. (I really only need two months of sure employment, as my 2013-14 teaching contract would actually begin in August -- High Holidays begin in early September and time will be needed for rehearsal and planning sessions).

Would I work in a bike shop again? Well, I can't say I'd ever work at Citybikes again -- the dynamics around my sudden departure all but assure that they won't ask me back, and certain conditions prevail there to assure that I won't bother to inquire. Would I work at another shop? Assuming there was a shop willing to hire someone with my somewhat arcane knowledge base -- I can overhaul three speed hubs but don't the first thing about shocks or disc brakes -- then sure, I'd do it for a couple of months on a fill-in basis. I do plan to drop off my resume at a few shops in the area and see what happens. It may be that my skillset is too arcane for a more modern shop, but I'll certainly apply anyway.


I admit that I am nervous about employment in 2013. There is no guarantee of anything with the synagogue past May, and I do not know what else I might be able to do. I may need to schedule some time with the job counselor at JFCS and see what else I can come up with. In the meantime, I am getting ready for my big trip to the Jewish music festival in February and hope that may open some doors for me.

All the best to my readers for great riding in 2013.
Posted by bikelovejones at 5:25 PM