The mini-rack that had long been on the front of my All-Rounder was simply not living up to any real standard of usefulness. So last week, I scored a Wald basket and today I swapped it in.

If you're thinking of a basket for your bike, look no further than Wald USA.
Wald is over a hundred years old, based in Kentucky, and makes really excellent bicycle baskets.

I've used a few of them over the years: 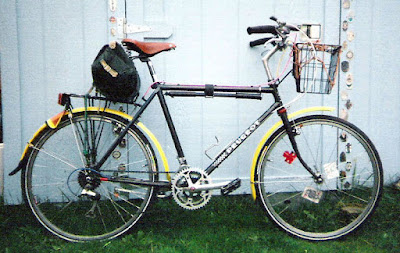 My Peugeot city bike rocked a Wald detachable basket on the front.
It was handy for a sweater, a sack lunch or library books.
I built this bike up in around 2004.
I still miss it terribly today.

Above: me on the Kogswell Porteur prototype I got to test-build in 2006. I built it up on a tight budget, and could not afford a fancy porteur front rack; so I installed the biggest Wald basket I could buy, and stuffed it to capacity. While it was wobbly going with all the weight, I liked the capacity anyway. Eventually, I decided that 650b wheels really weren't all that, and sold the bike to a friend.

These days, I ride a Rivvy All-Rounder that came to me about eight years ago as a frameset. I ride the crap out of it, basically, and these days that consists of shorter-distance, mostly daily rides around town. So when I decided to junk the mini-rack, my obvious choices was -- yup -- another Wald basket. This one is a smaller sized detachable model, the 3114, which doesn't seem to be available at Wald's web site (but you can find it in many bike shops, as I did).

Below: The All-Rounder with its new basket. (Yes, I am aware that it looks startlingly similar to my old Peugeot. I really loved that bike.) 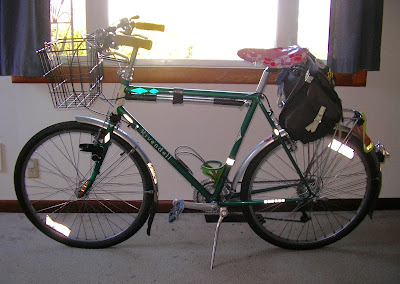 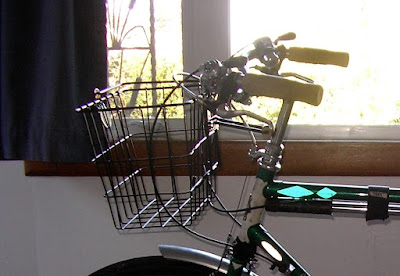 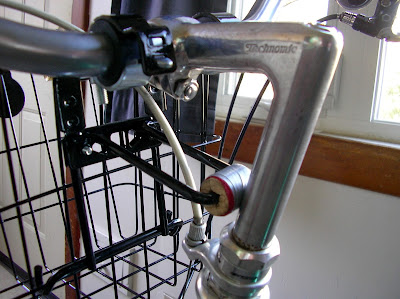 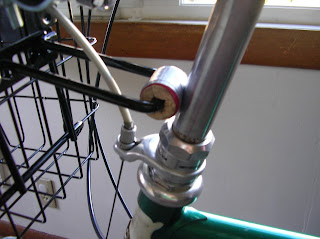 I knew I'd have to tweak everything slightly to avoid that fate. So I carefully bent the support bracket slightly more level, allowing it to prop against the handlebar stem instead (so both the stem and the basket would turn together). To keep metal from bumping into metal, I added some padding to the support bracket: I cut a section of wine cork, slit down the middle lengthwise and carved out a ridge inside each half, deep enough that thw two halves fit together again. Then I wrapped the whole thing in some tape. Besides padding the metal, it also eliminates the rattling noise usually associated with baskets.

I rode the bike on errands this afternoon and the basket worked beautifully.

Wald baskets are made in the USA, by workers who are paid a living wage and benefits, and they last a good long time. They improve a bike's utility tenfold and I have never been sorry for adding a basket to my bike.
Posted by bikelovejones at 7:53 PM