charlie hales throws his hands up in yet another direction (homelessness in portland, again)

So today Mayor Hales announced that his six-month experiment of allowing the homeless to camp along the Springwater Corridor path is over. He will once again empower law enforcement to sweep homeless encampments from the entire length of the path that runs within Portland city limits (all the way east to about 174th Avenue).

Where will the hundreds of homeless people go after the police have kicked them off the Springwater? Well, no one really knows.
And when the sweep is done, how many will simply return to the Springwater and rebuild their encampments? No one knows that, either.
Because the reality is that there really isn't anywhere else for hundreds of homeless people to go in Portland.
Most of the other popular campsites (under bridges and along sidewalks in inner Southeast Portland) are already filled beyond capacity; officers will simply sweep any campsites that block the sidewalks there.
In effect, there remains no long-term solution. Thanks to a long tradition of progressive policies on homelessness and a mild (if somewhat soggy) climate, Portland remains the easiest city in the country in which to remain homeless.

Lots of indignation from commenters at Bikeportland on this one, including posts that demand "something be done to house and feed all these people."

So far, City Council cannot compel developers to build affordable housing, anymore than it can require employers to pay a real living wage or even compel citizens to pay unilaterally-levied taxes (see Arts Tax). In short, our municipal government is powerless to enact any meaningful, long-term solutions to homelessness without the support of citizens and the business community. And this is a microcosm of what is happening — or will eventually happen — in other cites as they grow more popular and attract more people.

Portland is the tip of a national iceberg of the rapidly-widening chasm between the homeless and everyone else. Unless every single person with a stable home and a secure job took it upon themselves to house one homeless person privately… well, I don’t see that happening, do you?
This is a NATIONAL problem. It requires National solutions including legislation; re-directing of funds (from global wars for oil to national and state job-training and home-building efforts on a par with the old WPA); restoration of adequate mental health care resources; and a massive educational undertaking in every school to grow a generation of young people who may someday stop seeing the homeless as the Other.

Al these little band-aids, like periodic sweeps, only exacerbate the problem.
And based on what happening with our election cycle this year, I don’t see anything to hope for on the national horizon.

Is anyone here ready to take on their fair share of personal responsibility for this? What would it look like?
Are any of us really in a position to take in a homeless person, or a homeless family, into our own homes? Are we ready to take on the risk inherent in bringing in someone with no job, no job prospects, no family support and very real mental health issues that might pose a danger to us?
If not, what's left?
Well, based on what I see around me, a lot of Portland residents locking their doors and closing up their social circles and joining the ranks of those who demand that the homeless population be dispersed, removed, made to go away and never come back.

I have not ridden the Springwater Corridor path for my own pleasure in over a year and a half. The only two times I've ridden it at all have been during volunteer shifts for Sunday Parkways-East, when a significant section of the path becomes part of the designated route. This year Parkways-East was held in May. I was shocked at the number of encampments I saw along the route, and slightly horrified at the two unleashed dogs that nipped at my heels as I rode past and truly scared by the filthy, bedraggled men who were having a knock-down, drag-out in the middle of the path while I and others tried to get past them. A far cry from several years ago when the Springwater was just a nice place to walk or ride a bike, away from motorized traffic. Now you couldn't pay me to ride it.
Will it be any safer after the sweeps are completed in August? and for how long, before people begin to camp there again?


I wish I had a solution. I don't. At least, not one that anyone with power and money will actually listen to.

Photos:
A. Under the West end of the Burnside Bridge, along SW Naito Parkway.
B. Under the east end of the Hawthorne Bridge near Water Avenue. In both cass, tents have been there for months, and police have simply let them be. 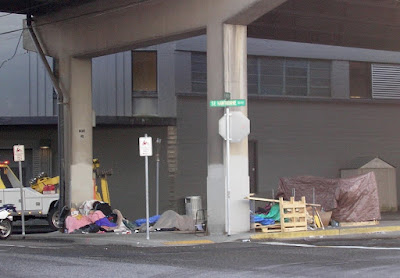 C. Tent encampment along the Springwater Corridor. Homeless Portlanders living here are often struggling with mental illness and/or substance abuse. Some turn threatening or outright violent when encountering housed Portlanders using the path. Two weeks ago, a friend of mine was threatened when Homeless campers completely blocked his route home from work on the Springwater, ordering him to go another route and surrounding him menacingly until he agreed to turn around and leave. Police were called but nothing was done. 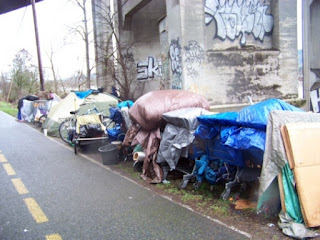 This will only get worse in Portland and everywhere else until a NATIONAL solution is put into place.
For that to happen, our priorities need to change.
Posted by bikelovejones at 11:36 AM