There was a period of time when I did not have a kickstand on my bicycle.

The bike was usually a lighter-weight model dedicated to either touring or racing.
Racing bikes, of course, shouldn't have kickstands.
Touring bikes didn't have them for years. They were seen as an unnecessary add-on, an anchor in terms of weight in an ear when weight mattered almost as much as covering as many miles per day as possible.
Today, Touring bikes have evolved. And so has bicycle touring.
With the ride of interest in shorter overnight and weekend trips,and the desire to ride the bike you have rather than buy the bike you think you need, kickstands are appearing on a number of bikes that would not have had them a decade ago.
Today, both of my bikes have kickstands. Both center-mount, so I can haul my old Burley trailer.
My All-Rounder has a pretty standard Esge kickstand (see also Greenfield, they're nearly the same).
The frame was made during a time (1999) when the folks at Rivendell didn't yet see the need for a kickstand, so they didn't bother to braze on a kickstand plate.
(I am amused to note that now all of their bikes come with one.)

My Bridgestone has something MUCH more heavy-duty. It's a kickstand-on-steroids.


I mean, LOOK at this thing. It's monstrously huge. 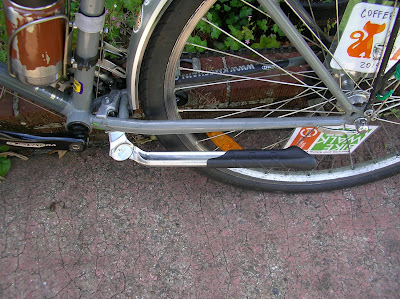 I can't tell you who made it. I found it at the Bike Farm earlier this spring, and decided to give it a try. Because of how large this bike's front pasket is, I decided I needed something that would give me a really stable third contact point on the ground.

This did the trick.

In fact, I was so impressed by it that I rode back to the Bike Farm a week later to see if I could find any more. And I did. So I bought it.


It fits anywhere a standard center-mount kickstand might. Only thing is you'll want to file down a little groove for your derailleur cable to run through, like so: 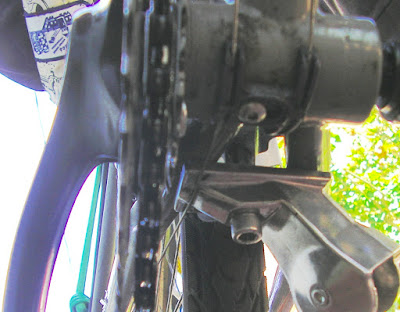 I could've done a better job of this but I was rushed and it seems to work fine. 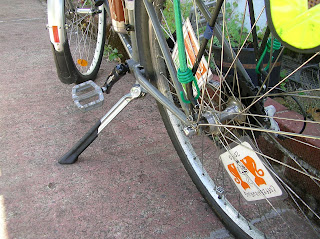 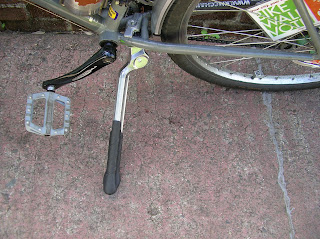 The other nice thing about this kickstand is that, besides being beefy as hell, it's also adjustable.

The black extension has a small allen bolt that allows you to set the length after you've figured things out.


So far, it's been a great addition. I'm hanging onto the second one in case I need parts or something. If you recognize the brand, give a shout.

Happy riding!
Posted by bikelovejones at 10:48 AM