My final Coffeeneuring ride was a combined coffee and errand trip to the Fred Meyer store in the Hollywood neighborhood of NE Portland.
Sweetie needed a few things we could only find there, and I needed a little pick-me-up after my Hebrew lesson. So off I went.
It's now dark enough in the evenings that I need lights to ride. And cool enough to add a flannel shirt under my jacket.

Fred Meyer is a chain of stores based in Oregon and Washington, founded by Fred G. Meyer in the 1920's and growing into a regional institution. "You'll Find it at Freddy's" was a slogan I grew up with.
The chain merged with Kroger about twenty years ago, but kept its name and some of its regional identity (though the store-brand toothbrushes say Kroger now). It remains a one-stop shop for groceries, household items, office supplies, furniture and sporting goods -- the larger stores still sell guns and hunting gear. And it remains a fixture in many Portland neighborhoods, smaller and far more beloved than its competitors (WalMart and Costco). 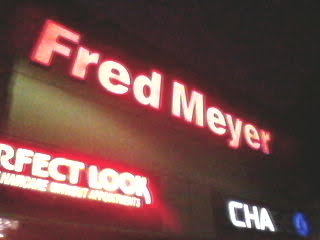 The Hollywood Freddy's sits next to a park that is not lit well; I noticed a couple of folks sleeping on benches there as I pulled into the huge parking lot and looked for the bike racks at the grocery end of the building.

On my way to finding a self-serve coffee sampler pot, I noted that Halloween decorations were out in full force.
And so was the Halloween beer. 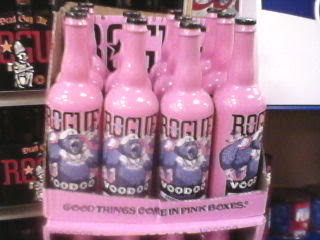 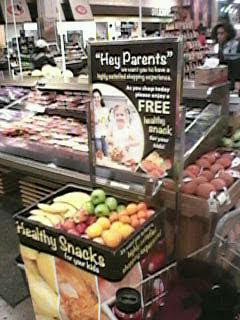 After finding some coffee and giving my thermal cup a couple of sample squirts -- it turned out to be some awful "French Vanilla" facsimile and I was glad I took only a taste. Sometimes "Shade Grown" means, well, nothing.

I got the things on my shopping list, and made my way to the checkout line. Along the way, I counted at least a dozen shoppers wearing bicycle helmets, and smiled.

Freddy's is following the example of other grocers in providing healthy snacks for kids -- but they don't frown if adults help themselves, too.
I grabbed a banana to get rid of the taste of the coffee, and wolfed it down in line.

It was not an unpleasant trip, if only because I knew what I needed and where to look for it all, and because I could leave easily when I was done.
(Word to IKEA: People actually want to shop and LEAVE. Stop making stores that are like mazes where you feel like you're trying to escape a minotaur.)
I loaded up my bike, unlocked, and enjoyed a lovely 7-mile ride home through residential streets with fall leaves backlit by street lights. I loved riding through my city on a cool fall night. I loved that, in spite of all the hipsterication, there were still places where I could feel rooted and familiar and at ease, places with funk and grit and some age to them that felt like they'd be around for awhile yet. Gentrification is real, but so are the parts of Portland that have not yet succumbed. I am grateful. 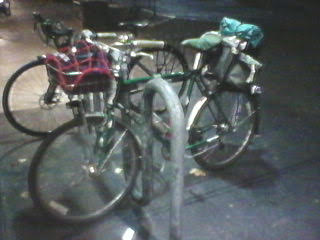 So that's it for Coffeeneuring this year. It's been an interesting run, and an eye-opening approach.
I'll keep riding and drinking and enjoying. Hope you will too.
Cheers.
Posted by bikelovejones at 11:48 AM