if i vote and nothing really changes, then what?

Tonight I will join my friends to celebrate Simchat Torah (or, if you're above a certain age, "Simchas Toirah"), a festival literally translated as The Joy Of Torah.
I study Torah regularly, both on my own and weekly with a group of friends. Jews are told to "turn it over and over, for everything is in it."

My life is deeply enriched by this study habit.
And yet, when we are called upon to reflect the truth we find in there back to ourselves in real life, and back to our friends and neighbors through our words and actions, what does it look like?
This election cycle has been brutal for my psyche and my soul. It hasn't played well for some of my relationships, either.
This year, voting felt far less like a privilege and far more like a duty, one that made me want to wash my hands afterwards with shop-strength Borax soap and hot water. I sent off my envelope last week the day after I got it, and felt only drained.
Worse than voting was in reading the earnest posts of so many of my friends and colleagues who still believe their vote matters greatly on every level, and that not casting a vote for the highest office in the land is tantamount to driving while drunk.
(Believe me, if I could drink, I would have poured myself a few shots of Chopin half an hour before filling in those stupid little black dots. Maybe it would have calmed me down.)
But the truth is that I feel like I was born in the wrong age for my vote to count more than as a cipher. Voting for me has become an act of social subterfuge, something I do to make my friends and acquaintances think I'm on board with the program. Voting is what Americans do, especially Americans with a hard-on for flag-waving nationalism, Americans who at least pretend that they believe in the enterprise.
The problem is that, since before I was old enough to vote, the enterprise has been rigged, has been bought and sold a thousand times over by intersts with money and power, has been and is being manipulated by those intersts to help insure a desired outcome that my little vote will not influence in any meaningful way.
If I want to influence the movement of the needle as regards societal values, the way I know best is to live my life and hope it influences others who see what I do.
At the local level, perhaps, my vote can still count -- especially if I live in a small town.
There's an after-school youth recreation program in a small town on the central Oregon Coast today because I registered to vote in Lincoln County and voted for it while I lived there over twenty years ago. Once it got established, people got used to having it and voted the bonds to fund it again and again every few years.
But that outcome is a lot easier to bring about in a town of less than two thousand people.
It's much harder to bring it about in a city of seven hundred thousand. So the powers that be have to spend so much money on their arguments as to make the whole thing seem ridiculous.
We could do a lot more to bring about meaningful change if we diverted those advertising dollars -- millions of them -- to funding job creation and educational programs to reduce poverty and homelessness and hunger.
But no, we need to prop up those important careers in advertising and social media. We have to keep telling our kids that a college degree is your ticket to adulthood. We have to allow our universities to invest in the stock market (because clearly, recruiting students on Financial Aid and reducing your faculty to untenured part-timers without benefits or job security just isn't bringing in the big bucks like you thought it would, right? )
We have to keep the machine running at all costs.

So I vote.
But really, if I'm being honest, I only vote anymore as a form of social subterfuge, to make folks think that I'm on board with this gigantic glacier of spin and money and wasted potential that our political system is today. Because if anyone suspects that I'm not on board with it, that given the choice I'd drop off an empty ballot and tell the presidential candidates to go jump off a bridge, well, there goes my ability to find employment and to get along with my earnest sign-waving, flag-waving neighbors and to maintain my role in the social order.
(Below: SE 8th and Oak streets, Portland, Summer 2016) 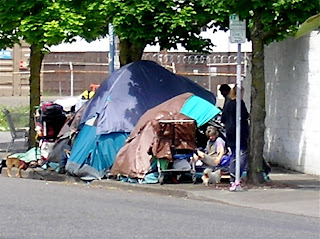 The social order is a mess right now. The proof of that is the four thousand people going to sleep on Portland's sidewalks every night, with no real plan in place to create safe housing and restore mental health treatment for them all. The proof is in the humiliation I still feel when I have to reapply for food stamps every six months -- humiliation I know I shouldn't feel because being this broke isn't my fault, it's the fault of a social order that decided long ago some kinds of work are more "valuable" than others and, well, hey -- I didn't become an advertising executive because back then I wasn't thinking about which job would earn me the most money, because I decided to follow the path my gifts and aptitude led me down instead. Sorry about that.

My casting a vote for President of the United States in 2016 will not change ANY of that.
And I am weary of feeling pressured to act as thought it might.
So I voted.
And I wrote in my choice for president, someone who wasn't on the ballot but who deserves my vote because we share a similar vision of how the country could get back on track.
And then I voted all the down-ticket things, and then I sealed it in an envelope and sent it off.
I wish to heaven I could be done, that I could wake up and have it be January 31 already so that the new President Figurehead could be installed and we could all just get back to our lives again and calm this crap down. Because this country will continue to be for sale to the highest bidder, and I still won't be allowed into the auction by the bouncer, and I may as well get on with doing what matters, making the change for good that I can make.
Because I learned a very long time ago that my ballot won't change the world nearly as much as my own two hands can.
Back to work. Party's over, people, nothing to see here, move along. 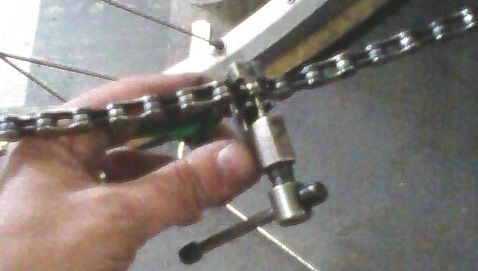 Posted by bikelovejones at 10:51 AM