goodbye stompy: end of an era

Stompy has a new home tonight.

I'd been trying only halfheartedly trying to sell my singlespeed bike (Stompy, Version 3.0) for months. Meanwhile, I'd taken it out a few times and ridden it -- the longest ride was in April when I rode 68 laps in the Ladd's 500 -- and each time I liked it, but I also sort of didn't.
The bike was light, and nimble, and fun. But it was also a little cramped for me when I compared it to the more relaxed upright position on each of my two other bikes. I had just resigned myself to having to store it for another winter when I got a text tonight asking if it was available.

Half an hour later, I had sold it for the asking price to a younger woman with (presumably healthier, younger knees), who rode away happily after handing me the cash. I watched her ride away, pounding the pedals from a standing position all the way up the hill on 13th. And I knew it was a better bike for her than for me.

Just before she arrived, I took one last photo of the bike, a lovely bike, a fabulous bike that I had ridden both off-road and on pavement since building it up three years ago. 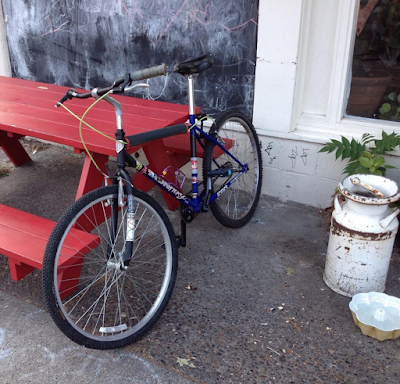 I wasn't ever planning to race again, so why did I build another singlespeed? Maybe because the fantasy, the tiniest hope of an idea of racing, still lurked at the back of my mind. As long as I had that bike the fantasy could stay and hang out awhile longer.

But fantasies can only be sustained for so long before they stop making sense.
So when I got the text tonight, I knew it was time to let the bike, and the fantasy, go.
I'm fine with it. I raced on a singlespeed bike for six seasons of short-track and four seasons of 'cross and people told me I was a badass for doing it, even though I finished last or near last every time. The one time I made a podium it was because there were only three of us in the category; all I had to do was finish, not die, and I'd earn a State medal in womens' singlespeed. I still have that medal and at some point I'll probably let go of it, too. But not yet. It still reminds me I was badass once, and could be again in some other way.
I still have my 'cross jersey, too, a long-sleeved affair that just fit me when I was twenty-five pounds lighter than I am now, and today I can still zip it up but man, it's a tight fit. Do I frame it with the medal and hang it on the wall? Naah. Maybe at some point I'll give it away, but again, not quite yet.

So today was a good day, a day when I could let go of a period in my cycling life and it felt totally okay. Tomorrow I'll go for a ride on a bike that fits me and feels way more appropriate to the rider I am now.

It took a long for me to part with my Miyata 610 touring bike, a bike that no longer fit my lifestyle. Once I did, however, I've never regretted it.