we are fucked right now, but not forever.

Today, the Rule of Law was officially gunned down in Washington, D.C., and its bloody corpse was later displayed on a pike in front of the White House, hung there by a politicized Judiciary that is now entirely in the grip of a power-mad Executive Branch. (In other news, the Legislative Branch, neutered back in 1992, left work and went out for a three-martini lunch.)

Meanwhile, the part of the world that still has money and places to spend it went shopping.

I sat in my yard talking with one of my beloveds, who told me that, among everyone in our family, she felt I was the one most prepared to cobble together a living during this pandemic. With my diverse skillset, my natural curiosity about how things work, my high tolerance for dirt and grit and an ability to self-entertain that I was compelled to develop from a very young age, I seem to figured out a way to meet the world on its terms and still wrest at least some of what I need from it. And I've mostly managed to do so with my sense of Self intact. But one little outlier isn't really real in the eyes of the reat of the world. I'm so small I'm hardly noticed, much less real.

What's really real is that right now, anyone paying attention is stockpiling camping gear, tools, and a sturdy bicycle that will make it over gravel and dirt. What's really real right now is that, while so many people are still in the grip of shopping endorphins, those who are preparing are taking advantage of that drug high by selling off non-essential items as quietly as they can, and converting the proceeds into tools, food, and other necessities that will allow them to stay below the radar when the crap really hits the fan. (The scarier ones in this group are also amassing guns and ammo and any other weapons they can find. I am not one of those. I remain a pacifist, for better or worse. It may get me killed in the end but it will not force me to lose my Self.)

How many people are still in denial, still hoping against hope that their votes will matter in November? (Hell, my vote didn't matter last week in the primary, because the outcome was decided before Oregon's ballots were ever mailed out. But I digress.)
While Drumpf may not be the sharpest tool in the shed, anyone with a pulse knows that he never had to be. All that was needed was for his handlers to guide him to his joystick module, let him play at Being President and keep him from stepping too obviously far out of line while the guys in the Star Chamber (aka The Council for National Policy) did their wheeling and dealing and laid the groundwork for what's happening now.

We would eventually have gotten here without COVID-19. It just would have taken longer. COVID-19 simply moved the hands on the clock, that's all.
COVID-19 wasn't a plan; it was just an unexpected gift combined with brilliant timing.
And so the People in Power (hereafter known as PiP) are using it to every advantage while the rest of us either stay hunkered down, or riot to open the damned barber shop already.

Either way, surplus population will die off, and that is exactly what the PiP are hoping for.

I won't go as far as calling this another form of Eugenics -- that requires far more forethought and than these clowns are capable of, and it requires more time than their shareholders have patience for right now.  They just want to see enough people die so that resources won't have to distributed among as many of us afterwards -- and the PiP will get to keep more of what's in the pot.

But the PiP are forgetting their own mortality.

And that's where I hold whatever's left of my "hope" these days.

Remember in the Bible, where the generation of the people who had known slavery had to wander in the desert for forty years before the Children of Israel could finally enter the Promised Land?
They had to keep wandering until most of them had died off, and their children and grandchildren had grown up. Because they could not be rid of the slave mentality thoroughly enough to build a new way of life in a new place. That task would fall to their children and grandchildren.

Right now, we are living in a time and on a planet where a LOT of people over 50 will die before this pandemic is safely behind us.

I may well be one of them.

I accept that.
I accept that because of so many beautiful moments that have already comprised my life to this point. The most recent moment came today, as we sat in the yard under the shade of a tree that Sweetie and I planted as a sapling 16 years ago this month. Then, it stood not quite five feet tall. Today it towers above the roof line of our house, spreading enough shade for three of us to sit and relax on a breezy, sunny afternoon. And that moment was a moment of perfection. We sat and talked and laughed, and the tree shaded us from a warm sun, and the breeze rustled the leaves overhead and it was a simple, glorious moment.

I have been blessed with many such moments in my life.
So if at some point my time to stop having those moments comes, then so be it.
Nobody gets to live forever, not even the People in Power. And so, like the generation who wandered the desert for forty years, I suspect that I am part of the generation which will have to move over and make room for the younger people coming behind us. When that time comes, I will gladly hand over my tools, and let someone else take up the load.
We all take our turns in life and at some point in the future my turn will come to an end.
When it does, I hope I will have just enough time to be grateful, and then I'll be done.

I feel like I'm better prepared for so much of whatever's next than the People in Power. Living just under the radar, with little left to lose and rich with blessings and gratitude for all I've had and done and loved. So while I hold out almost no hope for the immediate future, especially in the United States, I am filled with hope that those younger people who make it through this will help move humanity to something better than where we find ourselves just now. 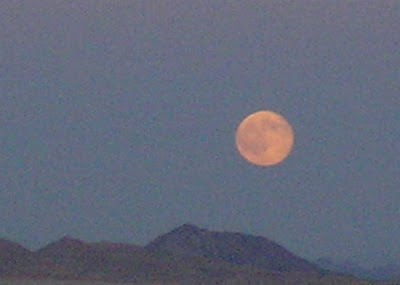 And tonight, that is all the hope I really need.

Posted by bikelovejones at 7:55 PM