A couple days ago, the rain stopped and the sun came out. So I took a chance and took a short ride to the store, where I needed to pick up a prescription and fill in a few things.

It was actually nice out, unusually warm during a sunny break between rain storms. But with only one functioning eye, it was very slow going, as I struggled with gauging distance and bright sunshine (my eyes are very light-sensitive now, post-surgery). Still, it was nice to be on my bike, turning the cranks and feeling the breeze pass along my cheeks. And it was also lovely to be able to get somewhere without having to depend on Sweetie to drive me there, or taking the bus where levels of mask compliance have varied more than I like. (Homeless folks are riding Trimet basically all day just to stay dry and warm, and they may put on a mask to get on the bus, but they will take it off or pull it down from their nose once they've taken a seat. The driver can't really enfoce anything while operating a bus, so that's basically that.)

So I enjoyed my short ride of roughly two miles RT. By the time I got hme, the sky had darkened, the air got colder, and the rain started up after I'd gotten inside. 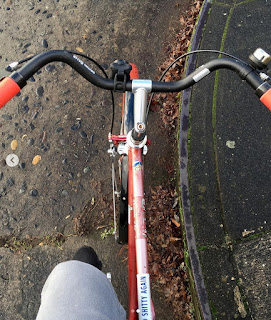 I've really enjoyed my singlespeed city bike. Taking care ti check and tighten the cranks and chainring bolts periodically and refill the tires as needed is about all the maintenance it's needed.

I enjoy the simplicity and the lightness of this bike, even as I sacrifice carrying capacity. I recently acquired a large front rack, and also a PDW Takeout basket and bag; I'm deciding which I want to mount on the front and I'm leaning towards the latter, simply because of its smaller size.

I hope to get out again this week during another dry spell. Even in the cold weather, a short bike ride around the neighborhood would do me some good. 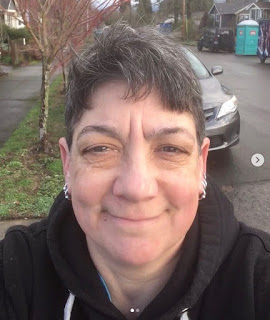 Switching gears: I've noticed for some time now the increasing popularity of enamelware coffee mugs, a throwback to the cowboy days when you made your coffee in an enamelware pot over an open fire. The mugs are durable and hold up pretty well, they keep a cup of coffee hot long enough to drink it, and they've enjoyed a resurgence in the "Coffee Outside" fad. Companies all over are now selling brand new enamelware mugs emblazoned with their logos, with prices ranging between $20 and 40.

I recently acquired a set of old mugs for very little money, and decided to clean them up well and paint over the chips (outside only, folks). Thenl I decided to turn a couple of them into my own "Coffee Outside" mugs, using some leftover decals from my friend Tarik. His #tarkisalehbikeclub items have become ubiquitous among the older bike hipster crowd in Portland and elsewhere, and I thought one of the decals would work nicely on a mug. 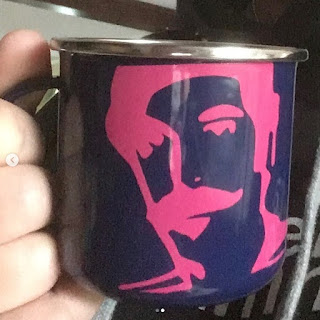 Here's the first one I made up. I've offered to give it to Tarik if he wants it.

Below, is the second cup I did, a much older mug that I intend to keep for myself.

Why buy a bunch of new, expensive stuff when you can make it at home?

I'm pleased with how these worked out.
And I get a lot of satisfaction in making culture instead of consuming it so much.

What do you have lying around that you can convert and re-culturize for yourself? Have fun with it, and happy riding. 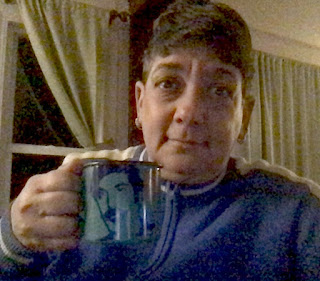 Posted by bikelovejones at 7:59 PM

I like to repurpose bags into bike bags. And my newest project has been creating stem bags from either leftover material (I'm a sewer) or from a jacket that I couldn't throw away after the zipper broke. I have more plans for the remaining jacket material. I'll post the stem bag project once we're past the 25th - one is a gift for a family member.

Please post a picture of the finished bags. Great idea! I returned a Pearl Izumi jacket and they replaced the zippers for me - they had corroded from salty sweat and replaced with nylon which won't corrode.

Pam Bikes, please go to anniebikes.blogspot.com for stem bags write-up and images. I did not wish to replace the jacket zipper. I have the same jacket in another color which is in better shape.

Glad to see you got in a ride, yes even a short ride is sprit renewing!! We've been lucky here in Co. Springs, we got two really nice, warmish days on the 25 and 26 so we got in about 37 miles of riding over the two days! It's turning windy today and COLD for the rest of the week with possible snow Mon night into Tue so look like the riding for 2020 is over, RATS. Hope you mending well, have a very Happy New Year's! :)