When I started working in the bike industry, like most newbies I was lured by the prospect of cheap abundant parts and began hoarding them in earnest. UNlike most newbies, I did not amass a pile of bikes. Most mechanics would acquire five to seven bikes by the end of their third year in the business. One legendary co-worker had as many as -- sit down -- seventy bikes, in various stages of rideability. Where and how he kept them all I will never know.
Due to my penchant for small living spaces I was limited to two most of the time.
Since moving to larger quarters some years ago with Sweetie, my collection has grown to a whopping four whole bikes, the number I can securely store indoors and still sleep soundly at night.

I now have three complete bikes with 26" wheels -- I have a thing for this wheel size, to be sure -- and two more frames clamoring to be built up and ridden. I can't build up either of them completely without sacrificing an existing bike. One of the current bikes is my singlespeed racing bike. Another is my Surly cargo bike. The other three bikes/frames pose the conundrum.

Bike 1: An All-Rounder I've never been quite able to make work for me. It's a beautiful frame, really a little small for me but with drop bars it has the right top tube length. One possibility is to convert this to upright bars and be done with riding drop bars altogether, since I'm never as comfortable on them as on uprights. I've had it for almost three years and I'm not ready to give up on it yet. This frame was a gift -- a long, amazing story I won't go into here -- so I cannot sell it in good conscience. If I can't make it work before the end of the year I will be contacting the giver to see about giving it back. 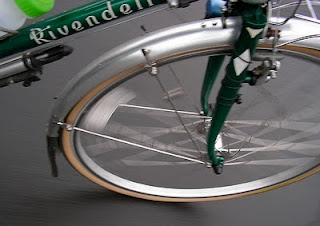 Bike 2: Last spring I brought home an incredible find: An early-era Schwinn High Sierra frame in pristine condition. It's in the process of being built up and I will figure out its future after I ride it. I am leaning towards keeping this one. 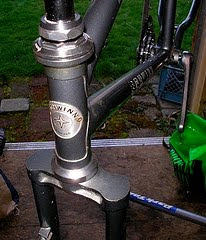 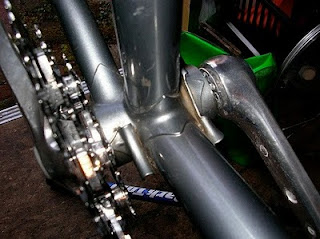 Bike (Frame, actually) 3: This week, a new find -- a Mountain Goat Deluxe frameset, circa 1988-89. It's shockingly heavy (made of tandem-grade tubing), takes a U-brake in the rear, and needs to be stripped and repainted, but it's a fascinating piece of mountain bike history and could be really fun to build up and ride. The question is, do I want to go to the expense of doing all that work on a bike I may not be able to keep? 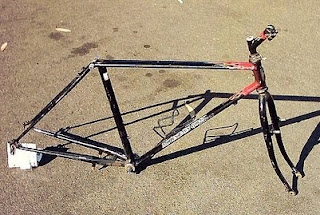 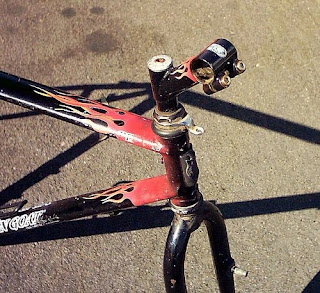 What I really need is more storage space, but that's not likely to happen anytime soon.
How many other bike freaks have this problem? How many of you have dreamed of building a two-car garage used exclusively for storing and repairing bicycles? (C'mon, admit it.)

(And before anyone chastises me for my bicycle excesses, remember that in the larger scheme of things, my four bikes still cost far less to own and maintain than a single automobile -- and I can do the repairs myself at home.)
Posted by bikelovejones at 7:58 AM