I rode part of the way to work, mostly because the bus wasn't on time and I didn't want to be late. Afterwards, I went to the shop, worked a half-shift and swapped in a new front wheel on my race bike; the original front wheel had a bad hop in the rim that wasn't allowing any tire to seat properly on it. From there I made my way to PIR.

I got there early so I could do a decent pre-ride and pick up the number plates for the Team Relay, the final event in the series. Pre-ride showed a promising course, with few really big hills and lots of off-camber transitions (yes-yes-yes-beth-loves-these). I am growing more comfortable with shifting and was able to utilize most of the range of my gears on the various changes in the course. I knew I would enjoy this race a lot. The dirt had been raked and was crunchy and loose and my rear tire slipped around a bit under me during both the pre-ride and the race. By the time of my race, the Cat III's a Juniors had tamped down reasonable lines, which made things nicer for those of us racing later. Still, things got a little slippy here and there. There was one particularly bad line that forced me off the course. When you get off the course you have to re-enter at the same place, so I had to wait until a steady strem of racers passed me before it was safe to attempt to get back on. Finally, I'd had enough and simply ran along the off-camber singltrack with my bike tucked under one arm. As soon as there was room to re-mount I did, and proceeded with my race.

I was still slow as molasses, and because they cut the times shorter (25 minutes instead of the full 30-ish) to make room in the schedule for the relay and the podiums, I had time to finish only two laps before being waved off the course by the checkered flag. I was disappointed; I had another lap in my legs and hadn't needed my inhaler once all evening. But my legs felt like they'd worked pretty hard powering around all those transitions, and my sandwich tasted delicious afterwards. (I ate some of it and saved the rest for after the relay, when I knew I'd want more food.)

Between the end of the last race and the podiums and raffle giveaways, there was the Short-Track Finale Team Relay. 26 teams, ten riders each, each rider takes one lap around a shortened course that utilizes only the moto course, each rider finishing a lap must high-five the next rider in order to send them on their way. In short, it's nuts. And once all the cats of Team Slow were herded together (!) and things got underway, we had ourselves a hell of a fun time. I went first because in the fading sunlight I knew that going later and not being able to see as well would be dicey. It did slow everyone else up as I was the last one back, but I knew that subsequent teammates would all be faster and hopefully make up for at least a little lost time. I slapped Erinne's hand on the fly, pulled off the course and watched each of my teammates tear it up. I was especially impressed by two newcomers ot Team Slow: Kelley rode her first short-track race that evening and then came back for the relay. She looked very comfortable on her mountain bike and I am sure we'll see much more of her out on the race courses. And Nathan was simply a revelation, passing other riders right and left during his very quick relay lap. As we watched him race, Kristin and I thought the same thing aloud: "we have to get this guy on a cyclocross bike because he's so damned fast." This was Nathan's first season of racing.

(Below: Team Slow waiting for the start of the Short-Track Finale Team Relay - thanks to Kelley for the photo) 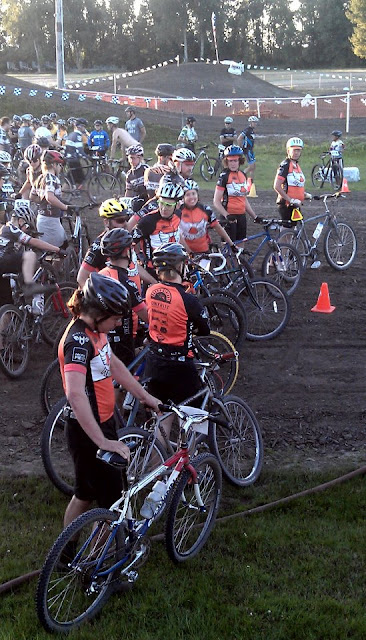 My one lap in the relay was shockingly hard; I was surprised at how tired my legs were after already warming up and doing one race. Kristin rode the double one last time (they will make her choose one category next year when she must cat up out of Cat III Women to either Cat II U35 Women or Singlespeed Women) and then did the relay on top of it. I don't know how she does that.

In the end we had a good showing -- amazingly, even with my very slow start we did not finish dead last, which was a cause for cheers and laughter all around -- and a great time.

After all the racing was done, we stayed around to cheer Kristin loudly as she got called up to the Cat III Womens' podium for her 3rd place series overall medal. Not long after that, we began making our way up the hill to the Red Fox. I wasn't planning to ride all the way because my legs were feeling tired (I would've taken MAX partway up the hill if I'd been alone, which I sometimes do when I'm really spent); but Kristin and Ben caught up with me and then stayed with me so we could chat all the way there. It was nice chatting up the hill with them. I found myself pedaling a little harder than I really wanted to and simultaneously enjoying the sensation of still pushing myself a bit, long after my racing had ended. It was my last race of the year, so what the hell?

I stayed for a drink and conversation, and went home around 11.

Today at work my legs really felt tired. I'm a little sorry I probably won't be racing anymore this year -- cyclocross is pretty impossible for me with my new work schedule and my knees don't like the cold -- but I'm glad I went out and raced the little bit that I did. I'm looking forward to a fall and winter of more cargo biking -- the side car will be here in September! -- and also figuring out how to train at home (without a gym membership or fancy equipment) for next summer.

Team Slow is awesome -- the best! -- and I am very happy to be part of it.
Last night was a lovely end to my teeny-tiny race season.
Posted by bikelovejones at 8:27 PM