the original rivvy is for sale

Sunday morning, I took a short ceremonial ride through the neighborhood, came home and knew that the LongLow won't fit me anymore. So I put it up for sale here: 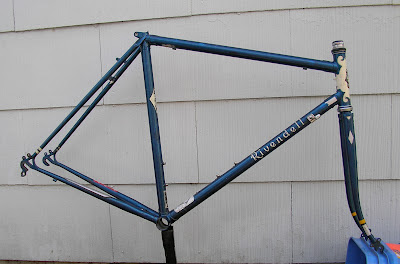 For many months between September 1998 and August 1999,  Grant peterson and I emailed back and forth to get the sizing right. I sent him my measurements using his Pubic Height system. For added perspective, I sent hime the remains of my crashed Centurion frameset, the one this Rivendell would replace (I'd straightened it on a jig first, and sent it along with cracked lugs and all).

Along the way I learned some things about frame geometry and about Grant's approach to sizing frames. And one of the things I learned is that he liked, in tose days, to put a rider on the biggest frame s/he could safely ride -- this stood in direct opposition to the prevailing ideal of the time which was to put riders on the smallest frames they could safely ride. Bigger frame meant more relaxed geometry and handling -- better for touring -- and a smaller frame meant a faster, more "squirrely" ride more suited for racing.

In the end I was told I'd be getting a 56cm frame with a "custom short" top tube, which would put the frame at almost square (the top tube was supposed to have been 55 cm, which wuld have made sense for short-waisted me). Along the way Joe Starck, the builder, built my frame to specs and then accidentally sawed through it as part of an experiment (he thought he was sawing through a different frame). So he had to make me another frame. When the frame finally arrived almost a year after I'd ordered and paid for it, I was so excited that I didn't measure it, and instead set about building it up right away.

Today, when I took all the parts off and cleaned up the frameset a little, I took some measurements so I could post it for sale. And I was shocked at what I found. The frame was 56 cm center-to-top, as promised; but the top tube was 57cm long center-to-center -- hardly a "short" top tube, and pretty inappropriate for a rider of my size and proportion. This explained why I'd always needed such short stems in order to ride it with drop bars.

If I had measured it upon arrival and found these dimensions I would have sent it back right away.
As it is, it's amazing that I managed to make this frameset work for so long.
I'm fine with it now. The frame and I have had some good years of riding together, and I have no regrets about that part at all. But knowing what I do now, I also have no regrets about selling it.
My stable is on its way to becoming exclusively a 26"/559-wheeled stable of bikes and I'm fine with that, too.
Posted by bikelovejones at 8:08 AM