Welcome to another installment of "destination D-I-Y".

I bought this in summer of 2012, before I quit working at Citybikes, from a former co-worker who was moving out of town. I paid $15 for it, and at the time it came with 20" wheels, ripped and moldy fabric panels (eew!) and no trailer hitch. I took it home and began collecting parts to make it better. Subsequent upgrades were obtained either for free or for trade, with the exception of the Burley "classic" trailer hitch which ran me $12 used on craigslist and one of the 24" wheels which cost another $20. So if I just count actual money spent I'm into this thing for under $50 total.

Best part: the webbing. I got all of it for free by scavenging it at local construction sites. Parr Lumber wraps their lumber piles in the stuff, and after the wood gets used the webbing gets tossed by the contractor -- unless someone snags it first. The metal cam buckles that often come with the straps are handy and they do work -- just cinch them down tight once you've got everything where you want it to be. In the event that I had to tie real knots I secured those with zip-ties and covered a few of those messy knots with some downspout-sealing gasket-tape (stretches and stays in place, available at Harbor Freight for super-cheap).

The result? A trailer that's perfect for towing my guitar and amp to gigs, as well as fetching groceries and other large items around town. And it's a much more stable ride than a two-wheeled cargo bike.
It looks funky and junky and it creaks a little under load, but I like it. 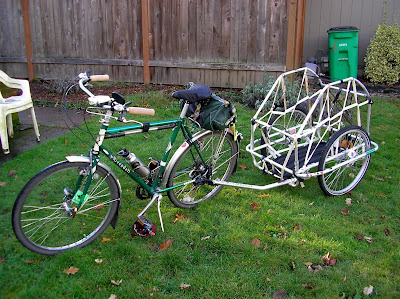 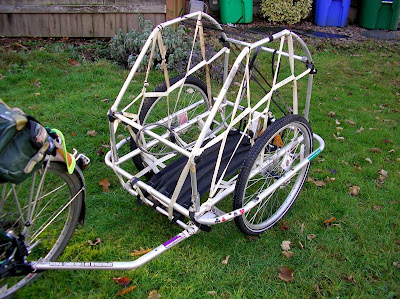 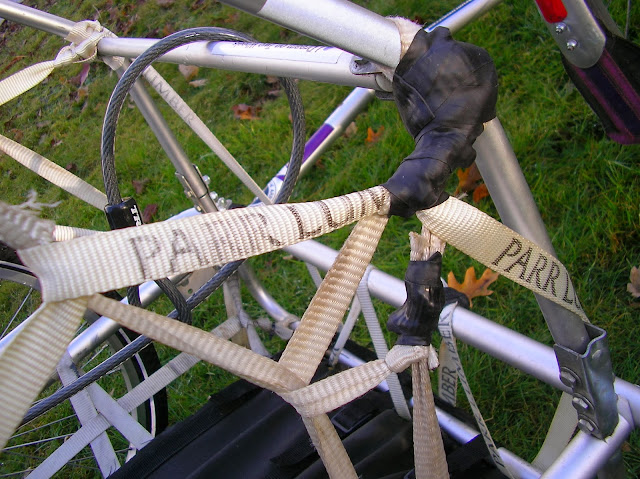 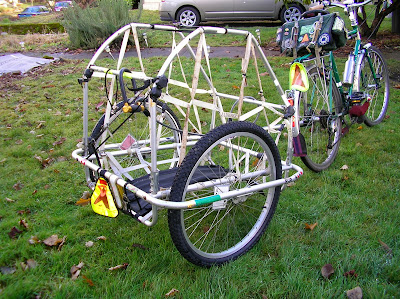