eight candles help brighten the whole world. so do bikes.

Tonight is the last night of Chanukah. The holiday will end tomorrow at sundown.
So tonight we lit the chanukkiah (a special menorah used only at Chanukah) one last time, with all eight candles. The view from the fron window, of our electric Chanukkiah with our two candlelit ones inside on the dining room table, was a glorious sight. 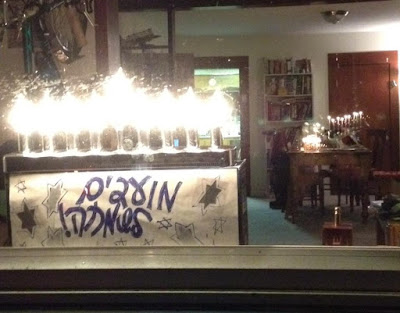 This afternoon, Sweetie and I went out and FINALLY planted the garlic. We'd meant to get this done earlier, but schedules and depression and a couple of bad colds kept us from doing it together and that's generally how we like to work in the garden. Together.
So finally, today we did it.
It's the last warm day of the winter before temperatures fall tomorrow night. It was nice to get outside and plant the cloves; I hope we'll have a more successful result than we did last year, when hardly anything we planted was big enough to use.

When we were done, Sweetie went inside again -- she's still nursing a cough -- while I finished off another bike for Catholic Charities.
Thanks to pals John and Randy, who provided me with some replacement donor bikes and parts, I was able to resume work and used some of the newly-donated parts to finish off a bike for a taller rider. 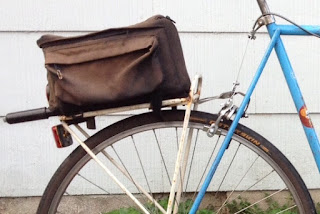 I had to deal with very limited clearance due to slightly taller tires, so in the end I opted for a trunk bag to block at least some spray from the back wheel; and a downtube deflector panel for the front wheel. Sometimes I have to make choices based solely on what I have available. (Hopefully, the new owner will figure out something better along the way.) 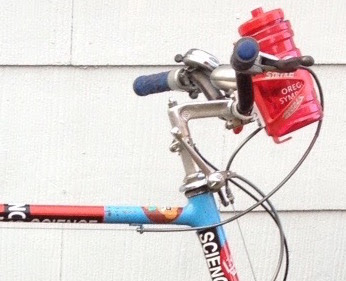 Then there was the upright conversion, something I've taken to doing now on ALL donated bikes. There are tons of free mountain bike handlebars around town, andfor someone getting used to riding in traffic in a larger American city, upright bars inspire more confidence on the bike. If the drop bars are steel, I'll sometimes convert them into hooks for the back or sides of the house, something to hand a garden hose on. I(I have two such handlebars holding the poles for our sukkah up under the eaves to help keep them drier.)

Finally, I noticed that the bolt for the left-side shifter had broken off, leaving the shift lever dangling loose. I removed the old cable and housing, the shift lever and all its hardware, and replaced it with a modified stem shifter mounted higher up on the stem (to provide clearance for the housing to come out at a steeper angle).
Once I put it all back together it was totally fine. 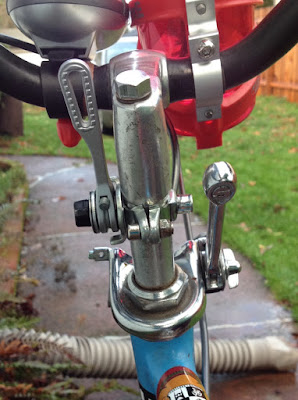 When the bike was done, I moved it to its hiding place off-site (I have a separate locked storage area down the street for finished bikes until they're ready to go to Catholic Charities) and put another bike in the workstand, an old beat-up mountain bike that came with everything but cranks, chain and wheels. it's nothing fancy but it will work just fine. This should come together quickly and I hope to get it done before New Year's.
The next several days will be colder, with lows in the 20s at night; but the space heater makes it cozy in my workshop and I'll probably wrench a little each day this week and next.

If you're in the Portland area and want to help out this little project, which enters its THIRD season in February, I am currently in need of some good bike locks, preferably U-lock style with two working keys. Good locks are expensive to buy new and I'm paying for what I can't find donated out of pocket. Money's very tight right now and I could use a little help with decent U-locks, new or used. If you've got a line on some, please let me know!

Thanks, and happy riding! 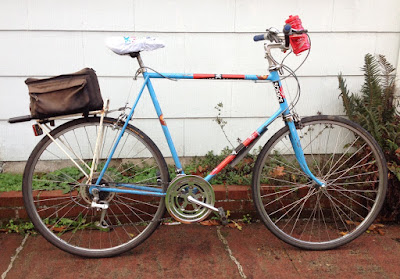 Posted by bikelovejones at 9:48 PM