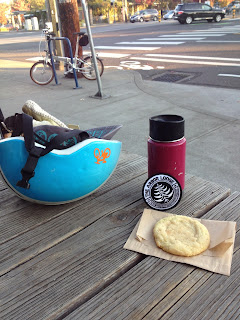 Saturday came and went. After helping to lead services at my shul, I picked up my new glasses at the optometrist, came home and crashed for a long Shabbes nap. I woke up at 4, realized I hadn't ridden all day, and decided to take an evening ride. The sun was low in the sky and would set soon, but there was still plenty of light as I made my way to The Arbor Lodge Coffee. I got there half an hour before closing and was treated to a free cup at the end of the pot of coffee, and a day-old snickerdoodle for twenty-five cents. 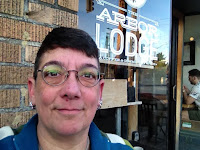 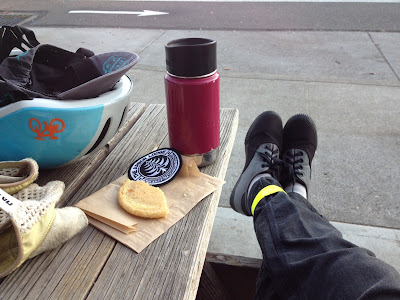 I also bought a patch. The price was right (three bucks) and I liked the design. I'll make some space for it on one of my bike bags.

I continued on to Overlook and turned south onto Willamette Boulevard, enjoying the cooling air and the dramatic drop of the sun behind the west hills.

I was also really enjoying the Dahon folding bike, which I plan to take with me to Ashland next week so I can get some riding in between plays at the Shakespeare Festival.

I'd attached a Bushwhacker "Shasta" handlebar pouch to hold my coffee cup, at the suggestion of a reader of this blog (thanks!). It's not perfect -- it hangs at a slight angle because the straps are not positioned exactly to fit the folding bike setup -- and has no extra pockets the way the fancy, locally-sewn ones do; but for ten bucks it fits the bill nicely without getting in the way of pedaling, and it's far more affordable than the locally-made models that start at $50.

Autumn here has been warm and dry, so the leaves have taken their time in turning and falling. But there are enough leaves on the ground now that I think we're on the downward slope of the season. Rain is forecast for the end of next week and after that most of the rest of the leaves will make their way to the ground. I've been enjoying the rich colors on my rides 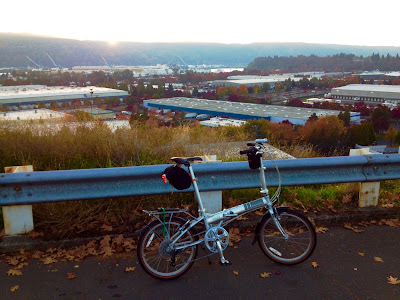 Sunset at Overlook (with the Willamette River and industrial complex below, and the West Hills in the distance; and moonrise as seen from N. Rosa Parks Way. 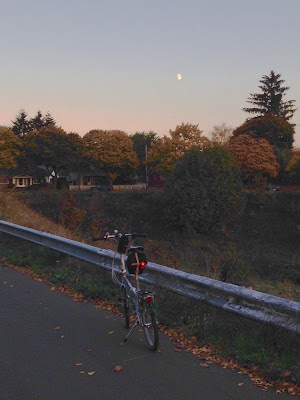 Total: around six miles. It was still just barely light enough when I got home that I quickly mowed the lawn before the light faded. One less thing to do tomorrow, and more time to ride.
Posted by bikelovejones at 7:30 PM