I left the house around 12:30 and rode to three different places that all turned out to be closed on Sundays. The fourth place had a line out the door. In the end, I decided to go to Peet's, where I thought I had a little something left on my card. But on the way there, I was confronted with yet another block of tents parked along a sidewalk. 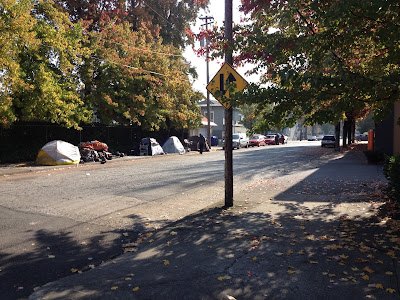 Shit, I thought. Will this ever get better? And what can I do about it if the people with the power and wealth won't do anything?
An estimated 4,000 to 5,000 men, women and children go to sleep outside every night in Portland, due to a crippling combination of things that all point to the one big thing: poverty.

When you're dirt poor in a city, you can't always access medical or social services. The cost of transit fare may be enough to halt you in your tracks. Rents are rising much faster than wages. There is a severe lack of affordable housing that the city and development interests are simply not acting to remedy.

So we have a ton of people forced to sleep outside.
And their numbers are growing.

Distraught at the sight of another row of tents, I lost all interest in coffee. But I hadn't eaten anything since around 7am and it was going on 2:30. I had to eat something in order to take my meds, so I went to the closest place I could find: A Taco Bell.

Yeah, I know. It really is all that bad. 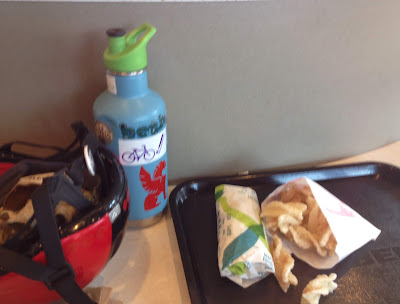 I ordered a veggie burrito and some cinnamon twists, and ate them with my own bottle of water while I watched the people around me.

Inside and outside the restaurant, people who looked like they hadn't bathed or eaten in days clustered around benches, fell asleep at an inside table, or nibbled the edge of a paper cup that had held liquid hours ago.

My "lunch," such as it was, cost less than three bucks. Fast food is cheap and that's why poor people eat lots of it.

Not sure whether or not I'll continue the coffeeneuring challenge. Today, like so many other things I do in my day to day living, it feels sort of pointless. I'll see how things go tomorrow. 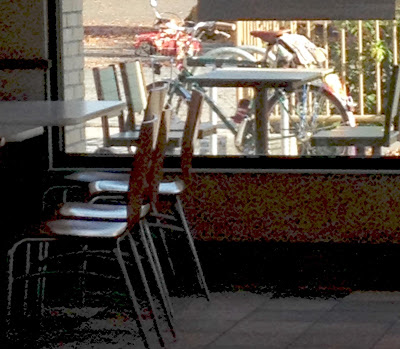 Posted by bikelovejones at 4:42 PM