Now that we all have to socially distance, self-isolate, shelter-in-place or whatever the hell your local government is asking of you, I'm focusing a lot more on fixing up the pile of donated bicycles that I didn't have time for while I was still a touring musician.

In the interest of transparency, I've sold a couple of them to pay for more parts to fix up the other bikes (which will go to refugee resettlement efforts when we can all move about freely again -- IF the Tangerine Wankmaggot ever allows more refugees to enter the country, but I digress).
My latest two projects have been a couple of naked frames that Upcycles donated to me last fall. I had plenty of parts to build them up -- or so I thought. Now that I'm working on the second of the two bikes, I am missing a couple of things that I've been trying to source free or used.

Today, I found this ad on eBay, and it made me, well, really sad. 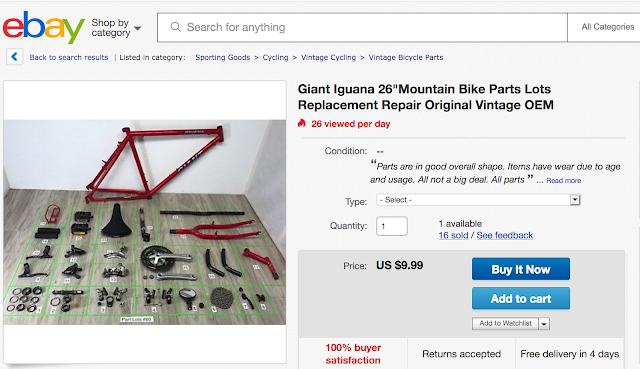 The drop-down allows you to see what's left. As of today, most of the bike has been sold off in bits and pieces. What's left is priced along "perceived scarcity" guidelines; $25 for one brake's worth of cantilever brakes,  $15 for the front derailleur, $15 for the bar-ends (does anyone even ride with those now?), and $25 for a very basic straight ATB handlebar.

The Giant Iguana was not a very exciting bike to begin with, just a basic affordable mountain bike that you could hand off through two or three growing siblings or turn into a perfectly fine campus bike. If he'd kept it together he might have realized $150-200 at most (depending on location -- bikes sell for more on the coasts than in the heartland, as a rule). But dismantled and sold off one piece at a time he's probably made twice as much, factoring some of his shipping costs into the price per part so he can charge "free" shipping.

It makes me sad, because this was once a perfectly rideable bike and someone could have tuned it up and ridden it away. Instead, the seller is maximizing his profit by selling it off in pieces, and since times are hard (and about to become much, MUCH harder), he'll get every penny he's asking for this way.

Someone asked me if I intended to keep fixing up bikes "for poor people".
He suggested that, since they're not going to allow anyone else into the country for a long while, I'd do better to fix these things up, leave off the protective stickers and just sell them all. But then I'd be competing with everyone else in town who's doing the same thing (and some of them are my friends, which makes it feel squidgy to me). Plus, fixing these up to give away is therapy for me, and giving the bikes away is part of the therapy. Doing it all for profit would change the vibe and then it would just be work again.

On the downside, I am running out of space to store bikes securely and won't be able to find a second secure location to store the extra bikes. So there's that to think of too.
The truth is that, as we shelter in place and try to stay busy and engaged at home, it will be harder for me to keep doing this in the time of COVID-19. What will I do?
I don't know, but I am definitely thinking about it. We are headed into a world that is going to be very different, possibly permanently, and that is already proving to be a difficult adjustment for many to make.
Meanwhile, I will try to get the bike already in progress finished. I'm waiting on the one part I had to order online to finish this one off, and then I'll ponder my options going forward.
I may just ask potential donors to hang onto their bikes awhile longer until I have space to store them safely, and hope that at some point I can go forward again with the way I've been doing things.

Posted by bikelovejones at 11:07 AM