So it travels fast, this coronavirus thing.
As of tonight, six people have died in a Seattle nursing home, and at least three cases have popped up in Oregon, including one in the metro area that forced the home quarantine of hospital staff who treated him.
Sweetie and I are supposed to travel to Astoria this weekend for an event were being paid to lead services at. it's not much money, but it also includes room and board. Neither of us is excited about going -- we've both been low-energy, me with various pesky autoimmune things and Sweetie with the grieving process for her Dad, who only died a little over two months ago -- and while neither of us has broached the possibility with each other, I went ahead and quietly emailed the event organizers, asking that if for any reason they decided they had to cancel the event, to please let us know by Friday morning (before we pack up and drive to the coast).

I am secretly hoping that, with an audience largely composed of elderly retired folks, they might decide to cancel or postpone the event out of caution. Especially since the elderly are especially vulnerable to COVID-19, and there's not yet a vaccine for this shiny new virus.

I know, that's a terrible thing to hope. Canceling the event would cost the shoestring non-profit a chunk of change they can't recoup. Not to mention it would disappoint everyone who's sgigned up to attend. But there it is.

They haven't responded and maybe they won't. But I asked out loud, just in case.

As for what to do here at home, that's another set of issues. neither of us is wealthy. We barely make our bills every month and it's a struggle. Being involved in performing arts, we both depend on people being able to attend concerts and shows at pubs and whatever. Cancel concerts and shows and the two of us lose paying work.
Then, there's the whole "Eergency Preparedness" thing, something that here in Portland has attained a cultlike social activity among certain of my friends as they've run out to join neighborhood task forces and emergency management teams and such. They long stopped asking me about my own emergency plans, because they know my answer.

When The Big One comes, whether in the form of an earthquake, terrorist attack or pandemic, we will have stocked up on food and water (there's already a few gallons on hand here and I'll pick up a few more or fill some jugs from the tap), laid in non-perishables and spare batteries, and hand-cranked flashlight and radio and made sure we know where the sweaters and extra blankets are (in case they have to shut off the gas heat).
And of course, we have multiple bars of Ivory soap so we can wash our hands the old-fashioned (and best) way.
I cannot, on Medicaid, lay in extra supplies of my prescription drugs.
I also cannot ask for help stocking up on extra food via my SNAP funding.
As far as staying indoors for up to two weeks, well, good luck with that. I'll certainly stay on the property, but if I need to hole up in my workspace to putter on bicycles so I don't go completely stir-crazy, I'll do it.
I have an appointment tomorrow downtown. When I'm done, I'll swing by my local supermarket and see what's left on the shelves, and try to buy a few things if I can. Then I'll ride home and spend the day puttering and perhaps practicing some music for the coming weekend.
But more than that, really, there's simply no point in overthinking this thing.
If the shit hits the fan hard enough that the supply lines dry up and I can't get what I need or even get to a doctor for a truly prolonged period -- like after the Big Earthquake everyone talks about but so few have realistically planned for -- well, then...

If no help comes and no relief is in sight for long enough, I guess I'll get sick and die.

Not a whole lot I can do about that except to put my affairs in order (which, as long as I'm this broke, they already mostly are) and be with loved ones. And maybe piss people off by riding my fat-tired city bike places that cars can't go, just because I can.

Seriously, these things always sell fear to generate more fear (and in turn, a wave of consumerism that helps to bump up the stock market for a few days, which is what people with money want anyway).
So why waste time over-worrying? Why freak out needlessly?
Just go out and ride your bike, make sure the basics are taken care of and spend time with your people. And remember that you're still breathing and upright and that's a good thing.
So please, PLEASE don't freak out. Just be grateful for this day, and ride your bike.
Cheers. 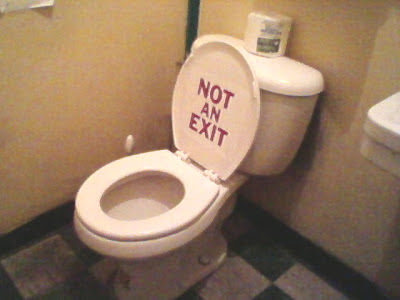 Posted by bikelovejones at 11:36 PM