The latest finished bike in the Refugee Bikes collection began with a beat-up frame (no fork).
The top tube had a dent in it, the paint was chipped in many places and there was no clear place for cable routing for the front derailleur. Still, I had a fork that could fit with some help, and a pile of parts. So I went to work.

Everything went together reasonably well. I did have to clean up some threads in the (rear) derailleur hanger and the bottom bracket. When I go to the head tube, I knew I'd have to either find a 1 1/8" fork, or I'd have to adapt the head tube so that it could receive a 1" headset. Not having a fork with a 1 1/8" steer tube of the right length, or cutting tools to re-thread a shortened head tube, I opted for the cheaper route of ordering the adapter kit by mail.
When it arrived, I had no difficulty installing it, and then following it by pressing in 1" headset cups. 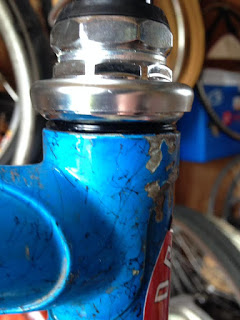 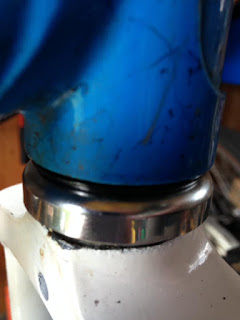 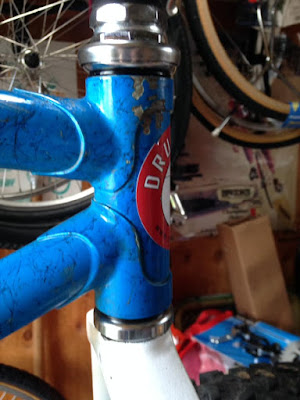 Once that was done, parts were added to make a working bicycle. I had to rob some from another donor bike (since I couldn't go to a bike shop and the donor bike may not be worth refurbishing at this point anyway). Then I had to tweak and make all sorts of adjustments so everything worked.

Best of all was that this bike, with no cable routing for either kind of front derailleur, allowed me to make a choice and then to make a fix so my choice would work.

I'm not a huge fan of top-pull front derailleurs. They require more exposed cable and make it annoying to put the bike in a stand for repairs later (you have to either clamp it at the seatpost, and/or be tall enough to use a really tall repair stand attachment like the ones from Efficient Velo Tools, neither of which is a good option for me). But, when given a chance to offload a functioning top-pull derailleur from my pile, I tend to want to send that out into the world on a bike that's not likely to see the inside of a bike shop right away. So I grabbed a top-pull from the pile, installed it, and set about making a cable stop to work for it. (Oddly, though this bike had cable stops on the top tube indicating a top-pull derailleur, there was no cable stop on the seat tube to correspond with that.)
I saw that the rear rack eyelet would get the cable close enough in alignment with the derailleur to make a cable stop there work. So I found an old seatclamp-mounted one, turned it around to improve the alignment, and installed it on one of the rack eyelets, like so: 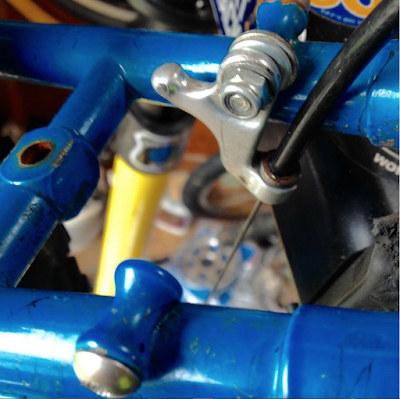 When the cable was hooked up to the front derailleur, the alignment was actually quite good, if farther away from the seat tube than it normally would be on a production installation. No worry, it worked fine. (If the owner wants to use a rack they'll have to find one that camps onto the seatpost, or just use a front basket.)


After that, the rest of the bike came together pretty easily.

The fork, donated by a local bike enthusiast, weighs a ton; so do the steel cranks I found. Both make the bike quite a bit heavy than it probably was when it came out of the factory. But since it's a commuter, that shouldn't be a big deal. Someone is going to have themselves a perfectly nice bike for daily riding to and fro.
I love it when I can problem-solve unusual situations mechanically.

And voila! Another example of reliable, sustainable transportation. 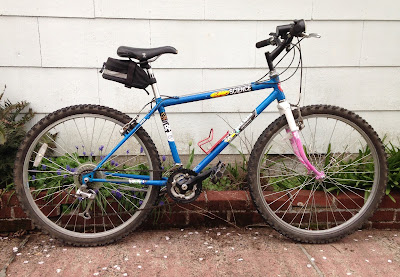 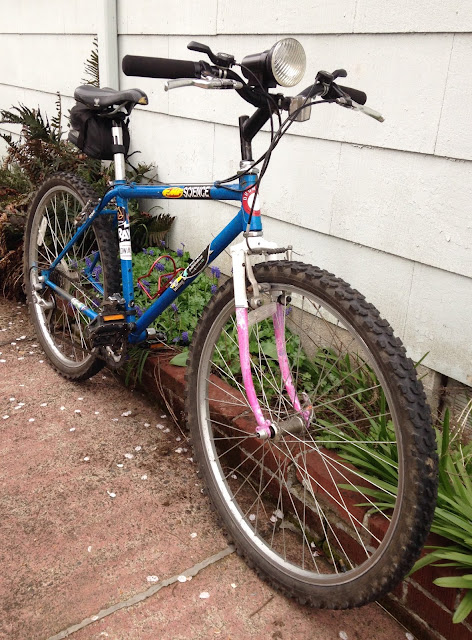 Posted by bikelovejones at 8:39 PM