part of the normal we're never going back to 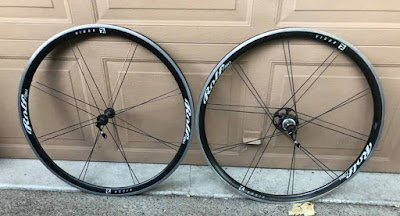 These wheels showed up for sale online today.
They are everything that is stupid about the bicycle industry, wrapped up in one photo.

And they are, for me and so many others, a part of the old normal that most of us will not return to as bicycle riders.

COVID is a dress rehearsal for so many other situations we are only seeing the first real stirrings of here in the United States: global warming, climate migrations, scarcity of resources, and general real-life safety wherever we find ourselves.

I don't believe I'll be around for the end of the Anthropocene Age, but I'm here for those first stirrings -- of nervousness, of anger and fear, or late-stage capitalism, of nations and their nationalism raging against the dying of the light.

I raced some ten years ago. I had fun. No one saw anything like this coming. We thought we would live forever, or at least for a really long time. I rode like I was twenty years younger, and had the time of my life.

But racing on a large scale is part of the old normal, and a whole lot of amateur racers won't be coming back after the pandemic ends. Because they won't be able to. Either they'll be disabled or killed by the virus; or they will have to scrabble for some kind of livelihood in a future where bike racing's importance is greatly, and perhaps permanently, diminished.

These wheels were stupid-light before the world caught on fire; today they're even stupider and therefore horribly sad. Think of the time and energy and resources that went into making these aircraft-grade wheels, wheels so light that one crash or bump would render them no longer raceworthy. Thousands of dollars for a wheelset that will be retired after one or two races.

Today, I and so many of my bikey friends have turned to "gravel" bikes; or, if we don't have that kind of scratch, an older mountain bike. My bike takes 26" wheels, holds a big bag in the rear and basket up front, and weighs close to 35 pounds including the lock. My wheels run 36 spokes front and rear. And they'll last a lot longer than these silly, spindly things.

So when you consider your bicycle future, consider all the stupid-light cool stuff that we have as a result of racing's trickle-down reflects a normal that isn't coming back for most of us.
And let's just ride the bikes we have and make them strong, sturdy and ready for anything.
Keep it real out there, friends. And keep riding.
Posted by bikelovejones at 11:05 PM

Hi, I'm a 66 year old cyclist who enjoys your writing, you do it very well. I have to chime in with another view, however. I have a crazy-light 2014 Cannondale Super Six Evo that I have ridden 16,000 miles on since buying it slightly used in 2015. I am still riding half of the original Mavic Cosmos wheelset, but I did crack the front rim when I hit a rock that fell from the bluff in front of me. That happened the first week I had it, and I never did it again, so far! Otherwise it has needed fairly routine maintenance: chains, cables, brake pads, bar tape... The thing about a light bike is the way it climbs. I know I could lose 10 pounds and I would reap similar rewards, but keeping it off is more dedication than I have, and the lightness of this bike makes rides that I otherwise would not do possible. If the ride is mostly flat, then weight is not an issue, and I enjoy riding my heavier "gravel" bike with beefy tires on paved as well as dirt and gravel roads. I don't think racing is going away. This years TDF was one of the best ones I have seen (all on TV of course), and I know some local folks who are still training and maintaining their race fitness through this pandemic. They say the bike industry is booming, now more than ever, and my local shops tell me they are back-ordered on many kinds of bikes. (I do live in Santa Cruz CA which is a pretty bike-centric community.)
Just my observations from here. Good luck with your eye surgeries and a safe return to the joys of the wheel.