Start to finish in pictures: My new Singlespeed bike. It's a keeper.

In early June, I jumped on what I thought was going to be a three-speed bike. I planned to buy it and fix it up in time for Society of Three-Speeds' fall event. I bought it for ten bucks. I it needed a lot of work, including a rebuild on the rear wheel; but it was all there. 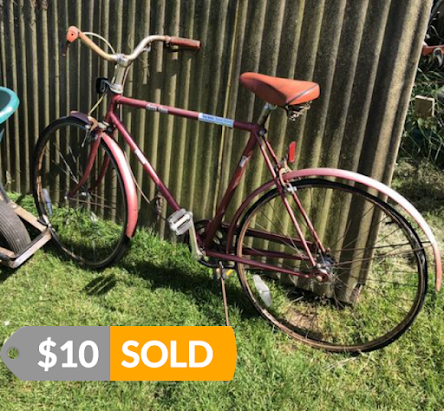 As the summer wore on and I got busy with fixing bikes for other folks and preparing to lead High Holy Days services, the bike inched along in progress. I'd remove a wheel or clean something and then set it aside. Finally, I was able to to take some time in late August and just hang out with this vintage Roadmaster for a few days.
This actually included putting it in the stand, sitting across from it and sipping coffee while I started at it.
The bike definitely had issues. The frame was faded and a bit rusty inside, and the wheels were rusted to the point of corrosion, especially the rear rim. 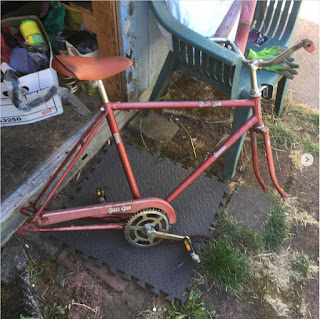 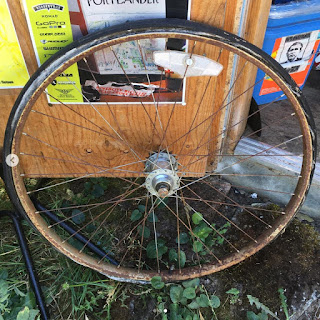 I realized that, because of how far gone both wheels were, it would actually cost me more time and money than I cared to spend to bring it back as a three-speed. I also realized that, between having to support a third wheel/tire size in my stable and not being all fired up about three-speeds, I knew I'd have to move this along or turn it into something else.

So I began to re-vision this as a singlespeed townie bike.

I had most of the parts already except for a better fork. I decided to get a 26 x 1 3/8" fork with better dropouts, and use 26"/559 mountain bike wheels with street tires. When a pair of red tires fell into my lap for ten bucks, I suddenly realized what kind of Singlespeed it would be, and that if it worked out I'd keep it for myself.

After swapping in the smaller wheels: 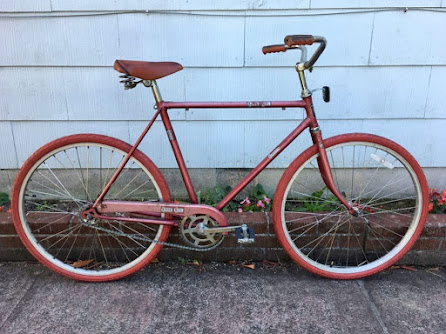 At this point, I had a coaster-brake rear wheel that was easy to swap in. I rode the bike around the block to see how it felt and realized two things:

a. the coaster brake wasn't enough to stop someone my size safely and quickly by itself, so I'd have to add a hand brake for the front wheel.
b. The cottered crank had slippage in the left-size crank arm, which meant I'd have to open it up and either overhaul it or replace it. Ugh.
I have the tool to remove crank cotter pins, ad it works great; but the system itself is klunky and really heavy. So if I opened it up, I sort of didn't want to simply clean it up and put it back together.

Since the frame had been made in the US, swapping in a cartridge bottom bracket and modern singlespeed crankset wouldn't be a problem. So in the end that's what I did.

Finally, I set about replacing the original fork with its cheesy, pressed metal dropouts with a chrome stock fork with real dropouts, stronger and better for the quick-release wheels going on.
And I found a better handlebar/stem combo from my parts pile that would allow me to ride slightly more upright and comfortably, and finished off the bike with a pair of caliper hand brakes.

The current gearing is 44 x 22, much lower than the bmx standard of 44 x 16 but still a tiny bit high for my aging knees. I'll live with it until I can find a 40t or 38t chainring, not a huge rush right now since I'm not riding very far on the bike. I'll probably also look to eventually swap in a lighter seatpost and saddle (though for now what I've got works fine).

I added a small saddle bag to hold tools and a lock, fenders for the rainy season, and platform pedals with plenty of grip, and took it for a ride today. Once I'd dialed in a few final adjustments, it was delightful and I can't wait to take it on longer rides around the city. 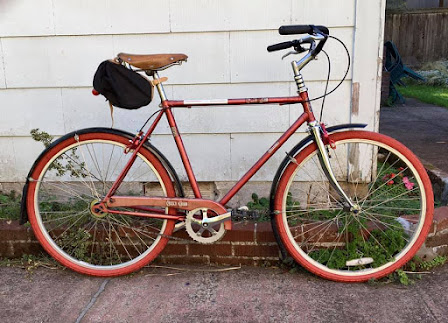 Posted by bikelovejones at 7:45 PM

A great restoration / refurbishment, it looks great. I enjoy reading your blog and seeing your projects, so thanks. All the best for the next eye op.

Love this. Problem presented, solution implemented. In a cost effective way. Your shop experience shows. Those old three speed wheels have very cheesy hubs, and the steel rims really are not a good thing. Thanks for the post.

Hey Steve -- thanks so much! I've since swapped out the coaster wheel for a singlespeed freewheel and it works really well. The caliper brakes are still a little sketchy, but I'm hoping to resolve that with a little more toe-in because switching to a full-on BMX caliper would make to too much flex and shudder. (Plus, I like the look of these brakes.)
Happy riding!