What's Nowhere times 2? Homelessness in Portland (and everywhere else)

For the past few months I've been helping gather useful things -- food, clothing and occasionally bicycle tools -- loading them up in my trailer and dropping them with Jenn Louis, a member of my synagogue who's also a chef. After closing her restaurant because of the COVID lockdown last year, she turned her attention to the many tent encampments popping up across Portland, and decided to do something to help. She turned her culinary talents toward making nourishing, delicious meals to distribute at eight homeless tent camps, three days a week. Over time, the food expanded to include warm clothing, sleeping bags, and even tents, all distributed to the myriad men and women moving through the encampments.

Homelessness means a transitory life, as people are swept from one location and must find somewhere else to sleep, often with little notice. Add to that constant stress, the additional stresses of increased physical and mental illness, untreated substance abuse issues, and insane amounts of deep fatigue from having to sleep outside and somehow survive, and the sweeps become not only devastating, but truly life-threatening.

Here's a report from Jenn, who had this to share today.

News from the streets:

Some days are easy out there, some days are really, really hard. Last week a camp that I have been serving was posted. That means that the city has put up a sign that says everyone living in tents or structures on the street has 48 hours to vacate. I find this terrible and ridiculous. Where do they go? To another street. It is unlawful to camp on the streets in Portland, yet the Joint Office of Housing Services for the city and county offer a wonderful array of necessary items to street outreach such as myself. So, I am assuming that although the city doesn't want the visual presence of homeless on the street, they know it is wrong to not help those who are in need. Fair assumption.

Everyone on the posted street left, except for one gentleman who suffers from untreated bipolar disorder. He served in the military and is now living alone on the streets. He was trying to move around the corner, but couldn't get it all done. He has returned to his original tent. I was just told that someone stole his bike while he was asleep.

Another member of the street was taken to the hospital on Tuesday and was diagnosed with pneumonia. His tent was swept while he was away. He will be out in the next few days and I have assembled a survival kit for him: tent, sleeping bag, flashlight, batteries, clothes, socks, underwear, toiletries and basic food needs.

I can't imagine how lonely these two are in this world.
I still need your support, please visit jennlouis.com for information. You can contact me from there, too. 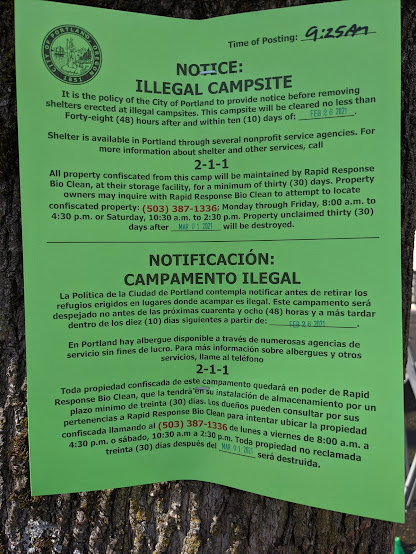 Jenn is applying for grants and forming partnerships with businesses from which she used to order food for her retaurant. They are providing ingredients for her hot recispes, while an army of volunteers are bringing non-perishable foodstuffs (peanut butter, cereal, etc) to leave with the people at each encampment.
And while it's great and amazing that one woman decided she could devote her time and energy to helping eight encampments of people living outside year round, the fact is that this is the tip of a very, very large iceberg.

It's estimated that as many as 14,000 people are sleeping outside each night, for want of housing. In many cases, homeless people are working and earning money, but it is never enough to even pay to share a studio apartment (which you can't legally do, but people do it anyway). The rest aren't working because they either can't find a job, or because they are unable to work due to medical issues.

As for their children? Most people with kids have found somewhere for their kids to stay indoors, with family or friends; others have had their kids taken away and placed in foster care. There are some kids living outside, but I haven't seen them at any of the encampments I've ridden by.

The greatest challenge is the lack of affordable housing, and a lack of political on the part of government officials to force the issue with developers and homeowners who don't want to support housing broken and poor people in their midst. Portland is in the process of building "infill" housing as fast as developers can put it up, in close-in eastside neighborhoods. But an 825-square-foot little house that costs $350,000 is NOT affordable for nearly anyone earning an hourly wage.
Secondary challenges include a lack of shelter beds in treatment facilities and a laci of access to affordable healthcare.

But the biggest "Big Picture" issues are, I believe, societal, and they will be the hardest to address.
They include a shift towards toxic individualism in our society; and a shift towards freely and openly suggesting that some peoples' lives matter more than others.

And all of these things are hampering the fight against homelessness.
But homelessness can be fought one person at a time, one dinner at a time, one bicycle at a time.
If each of us as individuals took on one task to reduce the burden of someone living outside, we wouldn't end homelessness, but we might slowly change the societal perception of how and why people end up homeless, and step in before those issues destroy us as a society, as human beings.

So I've turned my focus towards providing cheap bikes for people who've lost theirs as a result of sweeps of homeless encampments. I will ask Jenn to let me know if there's a specific need, and I can address that need with a fixed-up bike.

Of course, this means that I will continue to rely on folks bringing me old bicycles they no longer ride. So if you're in Portland and you have an old bike to let go of, you could do a lot worse than sending it here for repair and re-homing.

Thanks for reading.
Posted by bikelovejones at 11:05 PM