I like to go for a long bike ride on Thanksgiving morning, ahead of the large turkey dinner that my sister likes to serve in the early afternoon. This year, two friends came along which made the ride feel faster and shorter -- and more fun.


We began at the Paul Bunyan statue in Kenton. I pulled up to find that Edna and Barbara had already arrived a few mintues ahead of me. We took off almost immediately; it was cold and we wanted to get moving.

We made our way to the Columbia Slough path and admired the faint traces of mist still clinging to the water in the Columbia Slough, where two mallards paddled along in the murky water, higher up the banks since the heavy rains from the weekend. 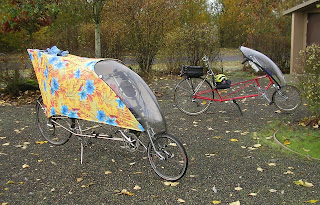 Riding past Smith & Bybee Lakes, we admired the leaves still hanging on the trees (rather late in the fall, but the cool, wet summer meant that everything was cycling later this year). Passing Bybee Lake on N. Marine Drive, we watched in wonder as a snowy egret took flight above the water and flew away out of sight.

The loop through the industrial zone was quiet and relatively free of other traffic. Riding with two recumbent riders meant we were all reasonably well-matched; on the climbs I passed Barbara (Edna was behind us), and on the drops they both barreled past me with ease. We took N. Burrage into the back side of downtown St. Johns and stopped at Anna Bannana's (http://annabannanascafe.com/) for coffee and Rice Krispy bars. While past the deadline for this year's official Coffeeneuring Challenge (which ended on the 18th -- and I'd already submitted my ride list anyway), I liked the idea so much that I will continue to enjoy informal coffeeneuring rides through the winter.

Anna's was hopping, as everyone else had the same idea we did: find a coffee shop that's open on Thanksgiving (and preferably, one that isn't part of a Large National Chain Based In Seattle). We were successful. 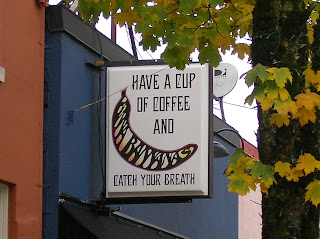 St. Johns has added bike amenities over the last several years, including this nice, roomy bike corral near Anna's. Last time I parked here was two years ago when Robert joined me on a brisk, cold New Year's Day ride through North Portland. Back then, someone had knit-bombed all the bike racks. SO Portland.) 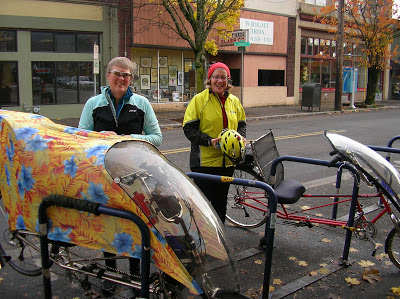 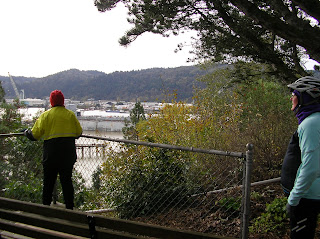 We made our way out of downtown St. Johns and over to N. Willamette Boulevard, which we took back to near the start.

Along the way, Edna led us into the campus of University of Portland to show us a little lookout at the back corner of the campus. From here we could see all of industrial Nrtoh/Northwest Portland and, off in the distance, Mt. Hood with a little cloud cap perched on top. 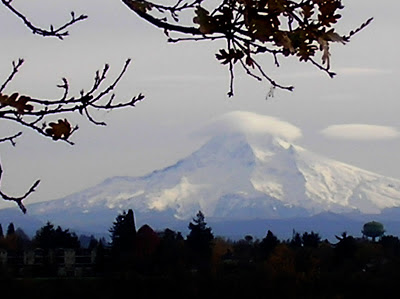 By the time we'd taken pictures and checked our watches, it was time to head home so we could get ready for our respective Thanksgiving gatherings. We rode to where Willamette intersects with N. Rosa Parks, and said our goodbyes. Edna and Barbara were off to Peninsula Park, and I wound my way home along Ainsworth.