Last month I rode across town in a downpour to buy a bike advertised on craigslist. The goal was to find another small mountain bike frame that I could build up as a small-wheeled, roughstuff sort of tourer/roadie. I brought it home in the trailer. 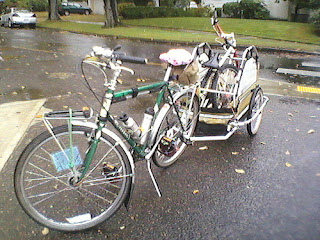 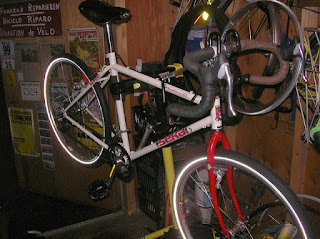 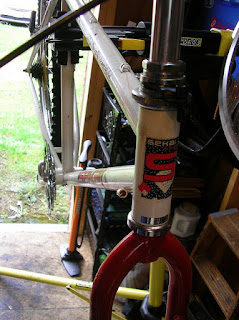 The bike needed work, and quite a few replacement parts, including new wheels and most of the drive train. Thankfully, I was able to use the original derailleurs. I used quite a few leftover parts from the Blue Rivvy, including the bottom bracket, pedals and cranks.

But when I went to swap in my stem and drop bars, the height was too short. Then I realized that both of my Rvendell frames had additional stack height built into the head tube -- something that most mass-produced frames don't have.

So today I swapped in a new fork, one of those cheap chrome replacements found at any bike shop. I didn't remove any of the steer tube. Instead, I built it up with about two inches of stack washers and the original headset -- and while it looks goofy it works fine. (It turned out to be a good thing I'd replaced the fork, because one of the canti bosses was bent and showing a hairline crack at its base!) 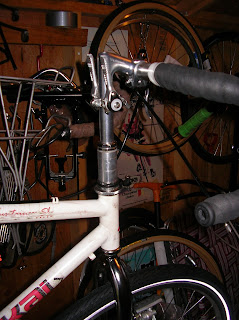 Looking at the photos again, the bike does look a little goofy. I suppose that can't be helped; I'm trying to make a cheap bike fit me with drop bars and I don't want to go back to 700c at this point. So I will live with a frame whose top tube sits a little too low to look "good", and has a headtube extension that's made from a longer steer tube and tons of stack washers. Whatever. It's safe, and it will work fine. Plus, the benefit of a small frame is that any issues of too long a reach have been solved. (I suppose if I stuck a front rack and boxy bag up front it wouldn't look so odd.)

I like the feel of 26" (559 erd) wheels, and now every bike in my stable has them. I have a ton of affordable tire choices, they handle poorly-maintained streets well and they can climb like nobody's business. Plus, I like the look of a mountain bike that's been city-fied.

For now, all that remains is to hook up the derailleurs and take it out for a test-ride. Ultimately, if it works out I'll fit it with fenders and a saddlebag, and I'll have an affordable drop-bar bike for unencumbered riding on the weekends. 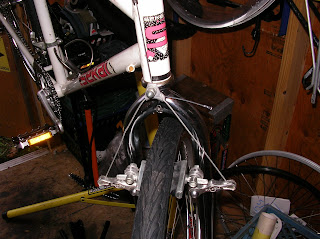 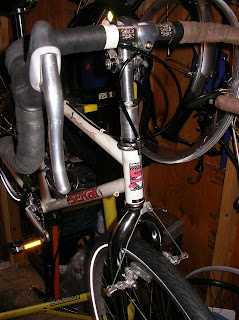 Posted by bikelovejones at 5:31 PM