So this Friday marks the start of the 2017 Coffeeneuring Challenge.

It will be my fifth year of participation, and I am working a theme for this year's challenge.

But first, a word from my [un]official sponsor.

If you are new to coffeeneuring this year, you can get the rundown of the rules (there are a few) by clicking on the link above.
And please, pleaes, PLEASE make sure that you bring along a reusable thermal mug for your coffeeneuring adventures. Because too many coffee shops and cafes still insist on serving their coffee -- even if you're planning on having it in-house -- in paper cups. (In some places, they even serve it in -- gasp! -- the dreaded styrofoam.)
Don't be the one who takes coffee in a non-reuseable cup!
Bring your own!

I know, I know. Thermal cups are not cheap. The good ones are double-walled stainless steel and come with various tops that will either keep liquid hot a long time and/or make it easier to sip on-the-go.

But you can find them used and cheaper on eBay and craigslist.

1. Hydro Flask -- based in Bend, Oregon, Hydro Flask is the new kid on the block. I haven't used their products but a few of my friends love them.

2. Klean Kanteen -- based in California, Klean Kanteen was doing this before it became cool and I love their stuff. Of note are their double-walled thermal cup designs with a loop cap or a easy-sip cap. I have been fortunate in that I've managed to find my Klean Kanteens used, either from garage sales or, in one case, for free. This one I found without a cap while riding across the Broadway Bridge five or six years ago. I found it, took it home, washed it thoroughly and bought a new cap for it.
It's small and portable and I travel with it on tour. I'm drinking from it right now as I type.
People know me by this mug now, which is sort of cute. 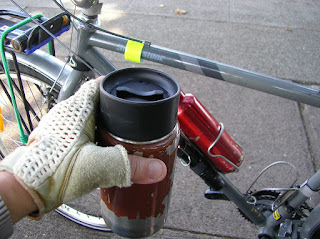 Some coffee sellers will give you a nickel or dime off your drink if you bring your own mug, another good reason for go refillable (because self-interest often sells more than guilt).

Now, for the announcement of this year's theme.

Every coffeeneur has the opportunity to choose a theme by which to mark their coffeeneuring route in a given year. There are no extra points for this, it's just a fun thing.  This year, I've decided to seek out coffee joints that are next to -- or inside -- bicycle shops.
It sounds like a no-brainer, and maybe it is. But that's only because we have a few in Portland.
And they're not all near each other, so I'll get in a few miles on the way. If at least five of my seven stops are in or near (within a block of) a bicycle shop, I'll call it good. Stay tuned and watch for updates during the Challenge, here at the blog.

Portland-area Coffeeneurs: There's an unofficial Coffeeneuring group thing n Saturday morning the 14th. Meet up at 9:30 at Water Avenue Coffee, choose your own route there, and those who want to continue the ride can do a flashmobride into Downtown Portland afterwards. Nothing official, don't RSVP, just show up by 9:30 to enjoy coffee by bicycle.

And PLEASE bring your own cup.
Thanks!

Posted by bikelovejones at 1:29 PM

Also of note is the Chris King open house 12-4 same day (10/14). It would be a great after coffee destination. But My guess is they’ll also have coffee available, and they loosely qualify as a bike shop - last time I went to an open house there they were selling discounted Cielo bikes and parts - so even if you miss the Water Avenue meetup you can get your coffeeneur on at CK.