Coffeeneuring Challenge 2017 - #6: The Cult of Personality

Today I rode all the way from home across town to Rivelo, the Portland outlet for Rivendell Bicycles. I was tired and very underslept -- I didn't wake up till around 9:30 -- but I really needed the ride. The chemical roller coaster of perimenopause, monthly cycles and depression intersected to make me feel emotional flat and awful this morning, and I knew that if I didn't ride I'd be that way all day.

Sometimes dealing with depression is a massive fight. You do the work (through counseling) to build tools to deal with ie, even to recognize when a dip in mood is coming on; but in the end sometimes you really have to force yourself to deal with it. This morning's ride started out like that.
Being basically broke from yesterday's rather expensive coffee stop, I brewed coffee at home and took it with me in my thermal cup.

It was beautiful morning, perhaps one of the last this year when I'd enjoy riding in knickers or shorts (cold, wet weather is due by next weekend). I started to feel better the longer I kept riding. By the time I'd gotten to the Esplanade, I was actually enjoying riding.  Cruising along the part of the path that runs at river level, I saw sailboats tied up at the boat ramp, people fishing off the sides (though I'm not sure I'd want to eat anything I caught in the Willamette), and folks jogging, walking, cycling and soaking up the sunshine.

At the top of the ramp, I stopped to catch my breath and admire the view up and down the river.
Since I was by now at least four miles from home, I also enjoyed my coffee, which was delicious. 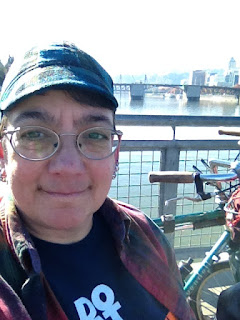 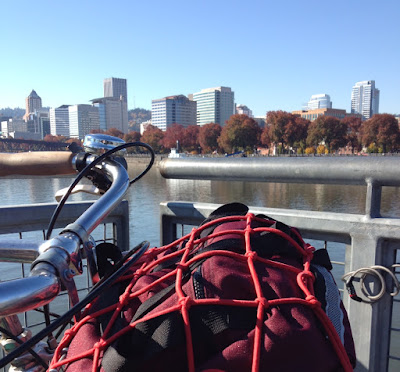 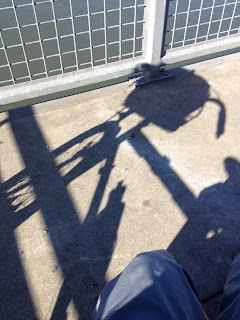 After my coffee, I continued southward along the Esplanade, cruising around the back side of OMSI (fun place, take the whole family) and past the transit center at the east end of Tillkum Crossing.

I arrived at Rivelo in time to get a parking spot at one of three small bike racks. The parking lot, I knew, would fill up with bikes as we got closer to the start of the actual program, a special visit from Grant Peterson (founder of Rivendell Bicycle Works). Grant founded the business over twenty years ago, and Rivendell's influence in the bicycle industry now cannot be denied. Thanks to Grant's penchant for comfortable bikes with clearances for wider tires and cargo capacity; the aging Baby Boomer generation (who lost interest in sitting like a racer as they got older and stiffer); and a renewed interest in riding for fun and transportation, Rivendell has given birth, if you will, to a dozen other bike companies that are all imitating the Rivendell aesthetic.

Take a look at the bikes parked in the lot by the end of the program. Most have upright handlebars, wider tires, fenders (it IS Oregon) and baskets and/or saddlebags -- things you would never see on racing bikes. And they're all built around steel frames. 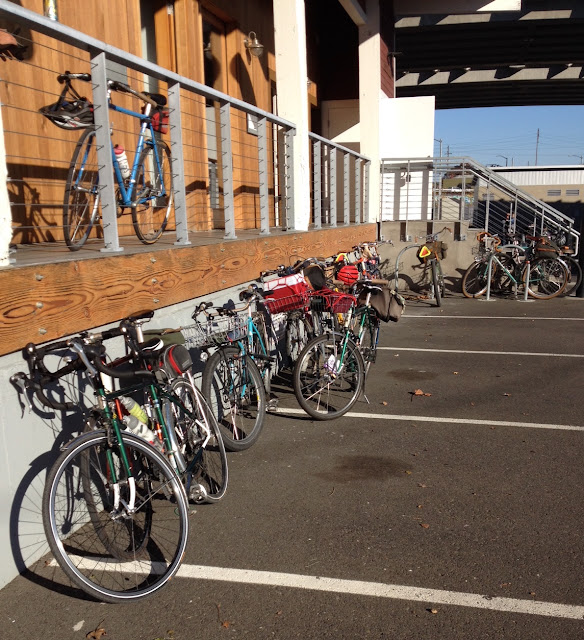 The talk itself was okay. Grant was his usual curmudgeonly self, though his tone has grown a little gentler than since the last time I saw him (at Interbike seven years ago). He was also refreshingly consistent in his views on bicycle design, the industry and peoples' buying tastes. He has grown a little tired of the cult of personality that has sprung up around RBW -- but he also knows that that cult is a big part of what helps to sell his bikes. He said that as long as he enjoys the work he'll keep working.
Still, I may have been one of the few there who was less interested in Grant than in all the folks who would come to such an event -- and the bikes they rode to get there.

Andy brought pregame snacks, in the form of freshly cooked bites of elk. Due to recent oral surgery I could only manage a small taste. but it was delicious. 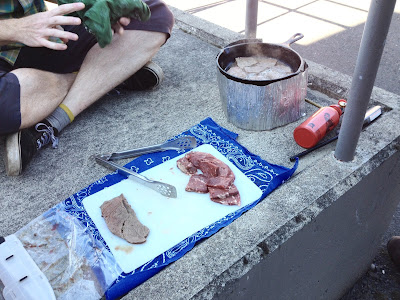 Before the program began, I enjoyed greetings the few folks I already knew and admiring the bicycles as they rolled in.

One thing that Grant has done is to open the market for quality bikes to include much taller riders than the mass market ever had interest in.
Are you 6'7"?  Maybe order your next bike from Rivendell. Seriously. They'll have it dialed. 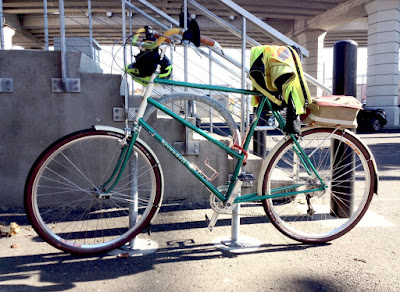 At the end of the program, I didn't stay long. I was beginning to feel a little moody from sitting for two hours of Q and A, and I needed to get home. I knew another ride would help, but I was also tired and had a bit of a toothache, so I rode over to the light rail station and hopped a train across town and over the river to shorten my ride home.

One of the questions kept recurring during the Q and A, though people tried politely to skirt it, was talk of a -- gulp -- succession plan for Rivendell Bicycle Works. Grant is in his early 60s, his children are basically grown and neither has any interest in taking over the business), and the cost of living in the Bay Area (where RBW is based) makes it hard to pay high enough wages to avoid staff turnover.
Grant is frustrated by the realities and there are rumors that he has been looking for another city to relocate the company to in case things in Walnut Creek get utterly ridiculous. It will be interesting to see how things progress.

In the meantime, it was a lovely day for a ride. and I will try to get a better night's sleep tonight.

Posted by bikelovejones at 6:20 PM

i've followed your blog for a few years now [i'm also a coffeeneur, or maybe i found you from one of my rabbinic websites?] i enjoy your writing, laud your spirit, am lifted by your knowledge. thank you.