I thought it would be nice to collect a few Portlanders who were all taking on the Challenge in one place so I suggested it to a friend, and suddenly there was a Facebook event.
He suggested Water Avenue Coffee as a nice, centrally-located location. I suggested we make it a suit-yourself ride (find your own way there, drink lots of coffee with friends, find your own way home).

So that's what happened.

On the way, I took the route through inner eastside Portland that I used to take to Citybikes Annex when I worked there. I had heard a rumor that the colorful mural, which had be created while I was still a co-owner there (and a small piece of which graces my second album), was totally gone, the entire building painted over with marine gray and the pack lot fenced in. 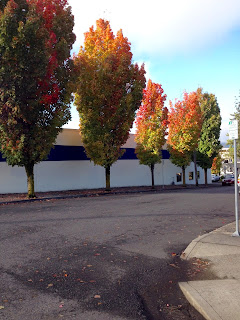 I stopped and admired the trees that I used to watch turn every fall, every day for so many years. When you watch a landscape evolve over time it becomes part of you in a way.
Even though I didn't take this route regularly (or very often) anymore, I still liked to watch these trees change color.
Due to the lack of rain this summer, the colors have come a little late this year, but most of the trees are still vivid red and orange.


I pulled up to the building formerly known as The Annex and stared. It was as if it had never been a bike shop. Even the cobbwork bench and plexiglass awning, held up with old bicycle frames, had been pulled off the wall out front and was totally gone. 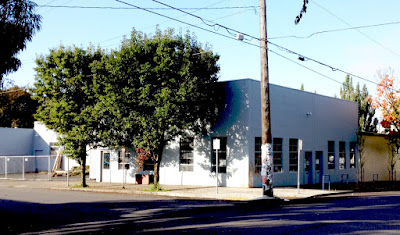 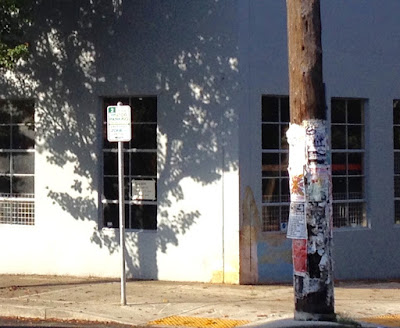 I rode on, taking Stark over to SE Wall Avenue and riding along the bike lane, now lined in many places with so many clusters of tents that they were becoming ubiquitous -- just as the whole homeless population in Portland was becoming.  At one point, I noticed that a homeless encampment had utilized an old bike team awning that I had seen a year or two before at a cyclocross race. Wow.

Inner eastside was still mostly industrial, with truck depots and warehouses, though signs of the coming gentrification were appearing here and there (I believe some re-zoning and some soil cleanup is in order before we'll see hi-rise condos in this part of town).
Still, there are hints that those who will be tossed aside by gentrification won't go quietly. 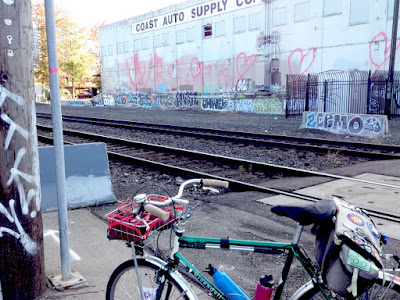 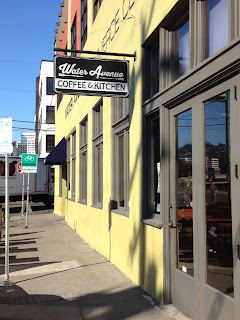 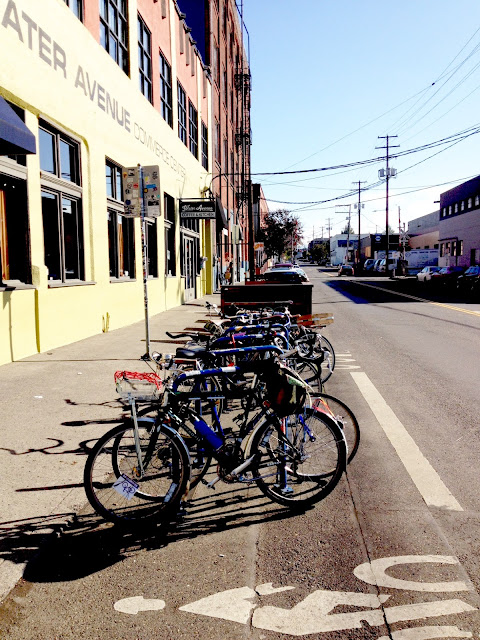 I finally pulled up to Water Avenue Coffee, where my friends were waiting, and where we were eventually joined by a few more folks who'd seen the event posted on Facebook. It's a nice place, though if you have nut allergies you'll want to have an entree instead; most of the baked goods are vegan and utilize walnuts or pecans to boost the protein.
We had a lovely, lazy time over cups of coffee, and when Katie ordered too much of a good thing she gladly shared it with the rest of us. (I will definitely go back for the open-faced almond button-and-sliced-banana sandwich). 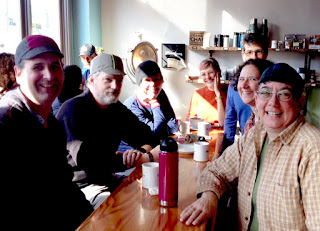 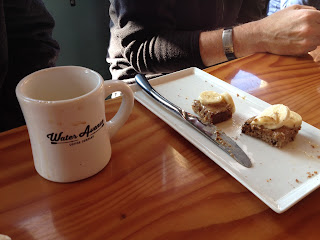 When it was all over, we went our separate ways. I headed over to Rivelo (not exactly around the corner but it's close enough that it took me five minutes to ride there, plus it was nice to visit with John).
On the way home, Another glorious burst of fall color, a large tree near my house that, in spite of having been trimmed clear of the telephone lines, was still majestic. 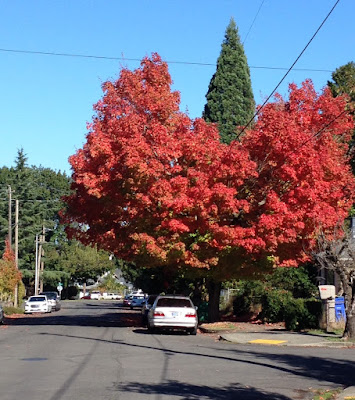