Today I wrapped up a refugee bike and started in on another one.
This one had a decent frame and entry-level components. When I checked the cranks and bottom bracket, I was horrified at the amount of play in what looked like a cartridge bottom bracket. 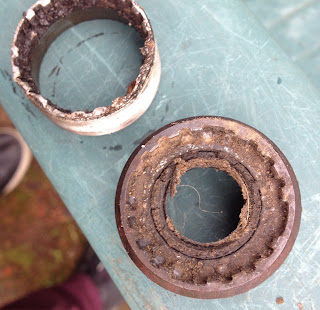 After some effort to get the crankarms off, I finally got the bottom bracket out. As it turned out, it was NOT a standard cartridge, but some odd combination of loose-ball-and-spindle that I'd never seen before.
First, there was a drive-side cup that came out by itself. (Shown at lower left in photo).

Outside it looked like a cartridge. Inside it was only a cup with what was left of a retainer bearing unit. It came out in pieces.

Next, I had to go after the non-drive-side cup, which also looked like part of a cartridge BB.
Getting it out took a little longer because it had been hammered and malformed 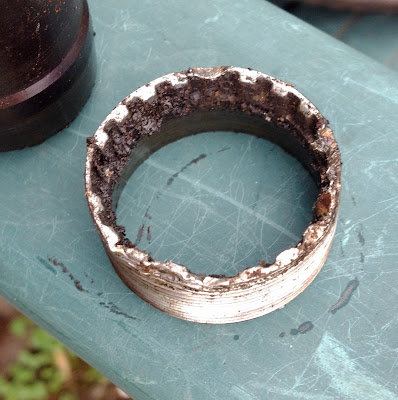 It was tough to get out but I finally coaxed it out. When I did, there remained a metal tube inside the bottom bracket shell of the frame.

The tube was threaded and straight at one end, and rounded at the other. From the rounded end, another damaged retainer bearing, this one with smaller diameter bearings than the usual 1/4".

I had never seen anything like this before. Based on the damage done, I hope I'll never see one again. It's sort of a wacky design. 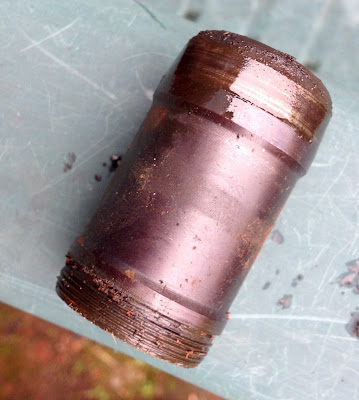 If I wanted to re-use the spindle I'd have to use it with all new cups and bearings.
So I pulled out a NOS bottom bracket set. I set aside the 9-ball retainer bearing and went to a jar of recycled loose bearings that I'd sorted and cleaned at Citybikes years ago. Anything that wasn't pitted got saved. Loose bearings work better and smoother than retainer bearings, and they also last longer between overhauls.) 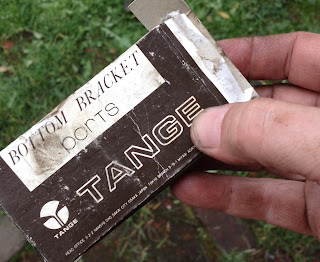 It's pretty simple, actually, to install a traditional loose-ball bottom bracket. The technology is simple, and the frame is threaded to take the cups easily with some grease.

Clean the threads in the frame, grease the inside of each cup and load it up with eleven bearings, install the drive-side (non-adjustable) cup first; then check to see which end of the spindle you want on the drive side (note: it isn't always obvious, insert it and check by placing the drive-side crank on the spindle. Don't tighten it down; but know you'll lose about 3-4mm when you do tighten it down and go from there.) the spindle, then the non-drive-side (adjustable) cup and lockring.
(When I did this, it became clear that the spindle of the original BB wasn't going to work with the new cups, so I had to root around in my parts bins until I found a slightly longer spindle that would work. I cleaned off the original spindle and tossed in the bin. The cups, such as they were, were too damaged to re-use so they went into the recycling bucket.)

Adjust for the sweet spot between less rolling resistance and too much play (it does exist, and when you've installed a bunch of these it doesn't take long to find and adjust to it). 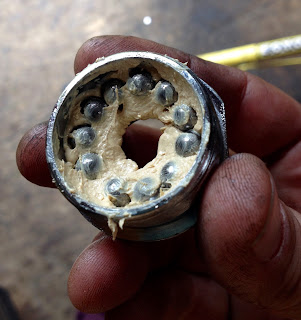 Then re-install your cranks, check for play and fine-tune your adjustment, and voila! Done. 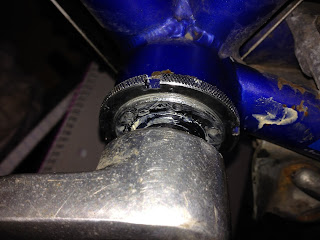 Side view of left cup with crank reinstalled. Inner cup is turned and then held in place against counter-turning of outer lockring to fine-tune.

Bottom bracket with new cups and reinstalled crankset. (see the spindle? in between the crankarm and the bottom bracket cup. In old-style BB's those are also replaceable, and come in multiple sizes to work with BB cups of different wall thicknesses and BB shells of different lengths (68 or 73 mm).

I LOVE fixing up old bikes and using old technology when it's called for. In this case, sure, it would've been easy enough to simply put in a cartridge bottom bracket if I wanted to. But these are donated bikes and I am paying out-of-pocket to bring them back to life, so I'd rather re-use older parts that work just as well when I can. This is why I've spent the last 20-plus years cleaning and saving old bike parts. It saves me money when I can simply resurrect a loose-ball bottom bracket using old parts I've been sitting on for a decade or more.

The other nice thing about loose-ball BB's is that you can get several overhauls out of them (figure once every one to two years depending on how often and where you ride) before you have to replace too many parts. When the cartridge bottom bracket bites it, you have to throw the whole thing in the recycling bucket and start again. Re-using is ALWAYS better than recycling, in terms of carbon footprint and the energy required to clean, melt down and re-form the metal.

The sad part of this is that almost no one in a shop is willing to overhaul an old-style bottom bracket anymore. They take longer, and it's faster (and frankly, far more profitable) to simply stick in a cartridge BB. Most younger mechanics don't even bother learning how to adjust a loose-ball bottom bracket anymore; they just replace it with a cartridge. And that's too bad. Because an awful lot of older bicycles are still out there with loose-ball bottom brackets that could simply be adjusted and/or overhauled, instead of chucked before they wear out.

It's worth considering if you ever encounter an older bike and want to fix it up.
Repair and reuse first.

Posted by bikelovejones at 6:21 PM