Late last summer, one of the thumb shifter clamos on my BStone bike broke. Snapped clean in two.
Not having time to really deal with it then, I bought a cheap thumb shifter at the CCC and swapped it in so I could get home. I pocketed the old shifter and put it away to deal with later.
With the warming days and the shutdown, I finally got around to taking a closer look at the old shifter,  a lovely Suntour with a hinged clamp (so smart! why isn't that a design standard?).

The break was clean and looked like the result of over-tightening on my part. It could also have been helped by the bike being knocked on its side.

I super-glued the break just enough for it to hold together while I worked on the real repair. 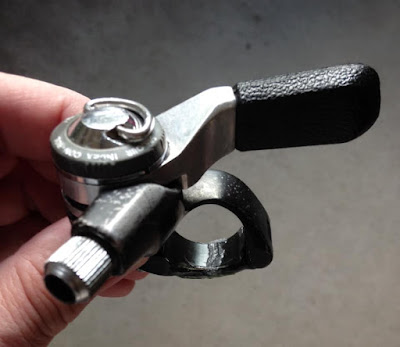 Once the super-glue dried enough to hold, I turned my attention to the real repair.

For this, I selected two bottle caps.

The first, I trimmed so that, when I folded the edges inside, the remaining width would match the width of the outside of the clamp.
This I shaped into the roundness approximating the outside curve of the clamp, and set in place over the break area with clear industrial epoxy, which I allowed to set overnight. 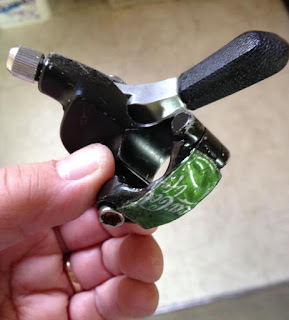 The next day, the epoxy had dried and hardened sufficiently that I could move to the inside of the clamp.

This required a finer touch. I could only use one layer of metal, with no folded edges; and when I'd cut it to size I'd have to first file the edges, and then carefully curve this piece to match the shape of the inside curve.

If I got this wrong, or it didn't set properly,  then the finished repair wouldn't clamp around the handlebar.
One thing in my favor is that I've been riding this bike with a steel Wald Touring bar, which is a very tiny bit smaller in diameter than an alloy upright bar. So I might be able to get away with this repair and still clamp it back into place.

I cut, filed, sanded and shaped; applied clear epoxy and carefully set it into the inside of the clamp with tweezers, then held it in place for several minutes before lightly applying more epoxy on the sides to strengthen the hold. 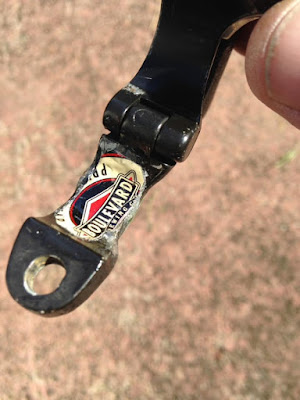 The next morning,  I was ready to try it and see if it would work.
Before I reinstalled the shifter, I laid down one wrap of thin blue rim tape, to give the clamp something to "bite" into -- a way to avoid over-tightening an already compromised clamp.
To my delight, I was able to clamp it carefully in place, and have it hold steady while I shifted. It held perfectly and shifted easily. 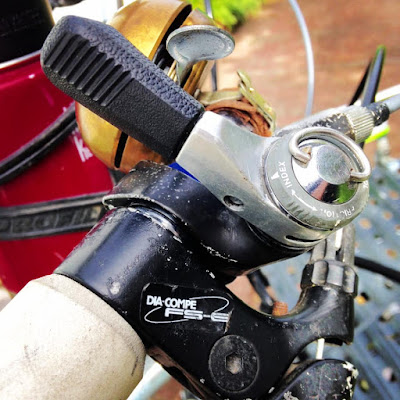 Stuff like this is why I really became a bike mechanic.