I decided to take up The Errandonnee this year, because it's another excuse to ride my bike on colder days of early spring, and because the coordinator makes it funny and fun to do.

The plan is to ride 12 errands [by bicycle] in 12 days. I can bunch 'em up, or spread 'em out. I need to take pictures and share something I learned on each errand/ride.

Today I hauled my guitar to the home of a new student who lives in NE Portland, about two-and-a-half miles from me according to my Portland Bicycle Map. 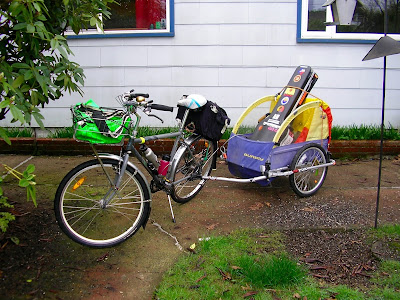 I left with my guitar and a waterproof bag containing my sheet music. I LOVE having a big enough basket to toss a bag into and not worry about it!

Along the way, I stopped for coffee. Because, well, COFFEE. You know.

I passed Sabin School and noted with delight that in 2016, parents are beginning to encouarge their little ones to ride to school again.
(I love how the covered bike rack evokes a little bit of ZooBomb in its design.) 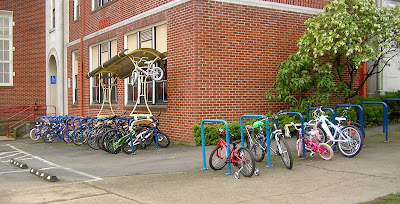 We had a great first lesson! My student was eager to try new things and learn as much music as she can. Bonus: I was able to lock up right in front of her house, with full view from her living room -- a really good thing in a city with such high bike-theft rates as Portland. 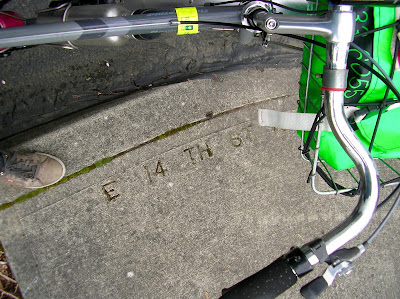 After the lesson, I rode back up and over Sabin Hill (basically, a dead mini-volcano), and -- here's what I learned -- the gear choices on my Bridgestone retro-build work well for hauling loads in a trailer, even up a fairly steep hill.

Below: Evidence of delight along the way. 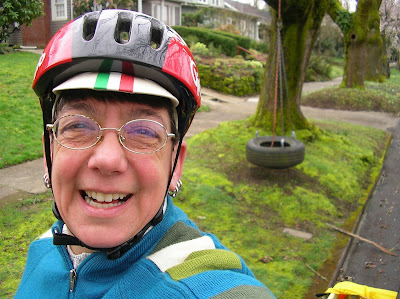 Total distance, round trip: around five miles. (I don't use a cyclometer anymore so I look on a paper map and figure it out that way.) File under: WORK (1st of two)
Posted by bikelovejones at 11:24 AM