I'm a little behind on the blog front, so here's two days' worth.

April 1: a mellow start to #30daysofbiking with a short neighborhood ride after Shabbat services. 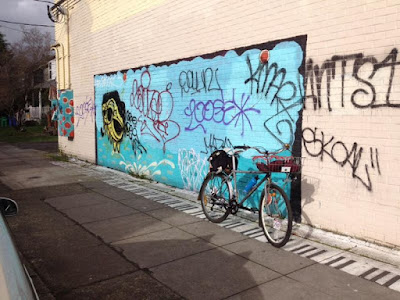 Most of my late afternoon ride took me around the Alberta Arts District, which is showing rapid signs of more gentrification. Old buildngs are being torn down or renovated to be turned into chic retail spaces and restaurants (how many restaurants do we need within a twenty-block stretch on one street?)

I was dismayed at the gentrification focring out locally-owned businesses like The Know nightclub and a couple of family-run Mexican taco joints. Then I noticed that the sign in front of the American Legion's Quonset hut was gone, and empty boxes labeled "membership files" had been stacked for recycling out front. Looks like the American Legion has left the building, which made me oddly sad.

Did earlier generations displaced by "progress" feel similarly? (Probably.)
Did they call it "gentrification"? (Probably not.)

Still, it was nice to get out and ride, and I felt grateful that I had the energy to do so.


*********
April 2: A longer ride.
Beautiful, partly sunny day with fast-moving clouds but not a spot of rain. And I got more comfortable with shooting video on the go. It never really warmed up but it was still so nice to ride without needing a rain jacket or a heavy sweater. 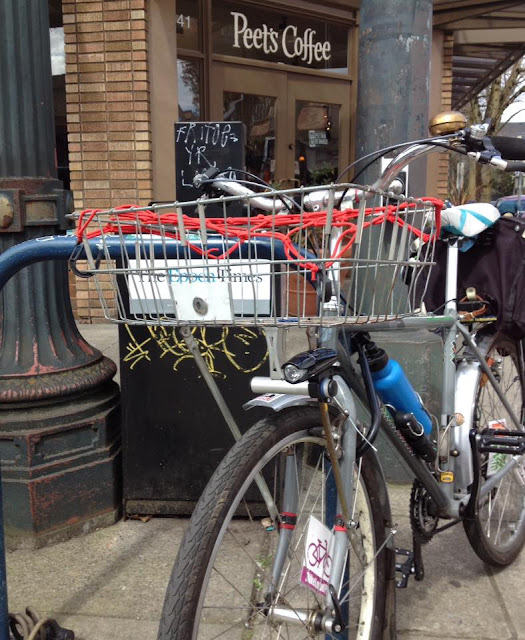 I met a friend at Peet's on Broadway, a planned meeting to discuss our synagogue's upcoming community [Passover] seder, which we are co-leading this year. It was so nice to catch up and spend time together. On the way home I took a circular loop so I could check the "free" shelves at Bike Farm and see if there was anything I could snag for my ongoing Refugee Bikes Project. Riding home felt delicious in the last hours of daylight.

Tomorrow is another day of biking.
Posted by bikelovejones at 9:21 PM

Nice that you are getting out or rides Beth. I am trying for another year of completing the 30 day challenge. Have been successful 2 of 4 tries! How good for us to have a couple of dry days to start us out. Have fun in April 30 day challenge.
Nancy