A cloudier day, with rain due in the evening. After a morning spent on work matters, I hopped on my bike and rode down to the Kenton neighborhood to have a late lunch at Cup & Saucer Cafe and to say hi to friends at Kenton Cycle Repair.

I forgot my iPad, so had to resort to the poor camera on my flip-phone and could only get off a couple of photos before it died.

The giant coffee pot inside the cafe. It's non-functional now but I think it was meant to be the world's biggest coffeepot. Sugar dispenser at bottom shown for scale.
Go here for their egg-based breakfasts, and the best scones in Portland, made fresh daily and served warm with butter and raspberry jam. I always get a basket of three and take two home. They're that good. 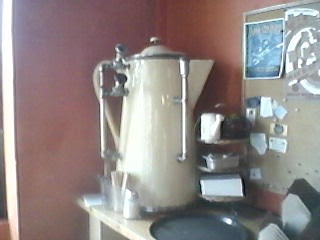 After lunch (which was really breakfast: two eggs, bacon and a scone) I went around the corner to Kenton Cycle Repair and said hello.


The shop, sadly, was broken into two days ago and they lost several bikes and a lot of retail accessories. I offered my sympathies and asked if I could be of help. Rick (the owner) appreciated the offer but said insurance would cover most of the losses. Plus, they're moving soon to a larger location up the street and hopefully security will be stronger and better.

I noticed the large pile of scrap metal boxed up at curbside, and was invited to help myself to anything I wanted. In the boxes were all sorts of cast-offs, including old derailleurs, housing, reflectors and best of all, five brand-new 8-speed freewheels -- take-offs from new bikes that the shop decided to swap out for something else. Granted, low-end freewheels aren't anything to make money off of, but with my ongoing refugee bike project they might come in handy. So I took all five of them, along with some nice long pieces of derailleur housing that will come in handy. 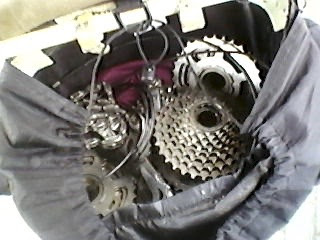 I LOVE scavenging for bike parts that I know I can use.

Also ran into a couple of former Citybikes co-workers now employed at Kenton; and my former boss from my days at Community Cycling Center. Hugs and smiles all around reminded me that although I've left the industry I can never leave Portland's bicycle scene. It's nice to feel like a fixture in it.

Enjoyed a cool, damp ride home as the rain slowly made its way in from the coast. My sweatshirt was all I needed to get home in the light drizzle. I missed my chance to mow the lawn with our manual reel mower, but that's okay. Warmer days are coming, and I've gots lots to do to get ready for Pesach (Passover) next week.

And I have two scones for tomorrow's breakfast. Yum.


Posted by bikelovejones at 5:49 PM