I had planned to gather together some friends for this one and even set up a Facebook invite. A few responded. Sadly, when the day came, no one else showed up. I assumed the racier types were all out in Rainier for the Cross Crusade race. Still, I was undeterred from having a nice ride.

I began at Arbor Lodge, at the corner of N. Rosa Parks and N. Interstate. (To clarify for purposes of the Challenge: Arbor Lodge is almost two miles from where I live so it qualifies.) These guys do very nice things with LOCAL pour-over and drip coffees! They also offer a selection of tasty pastries, cookies and light savory fare like bagels; and I learned today that they rent out the space after-hours for special events. (This could be a possible spot for my album release party in December...) 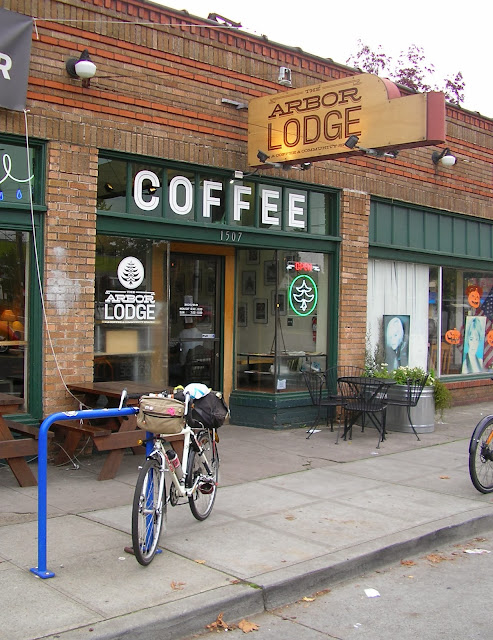 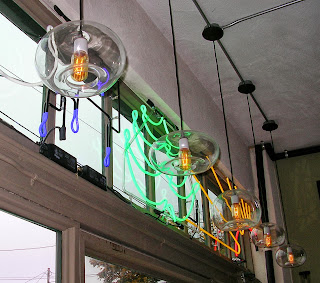 The air was cool, even a little cold; it had been in the mid-40's when I'd left the house and had yet to warm up to 50. I was prepared with thin layers of wool, including thin wool tights under my knickers, and toasty wool socks and gloves.
I also wore a thin wool earband over my cap (under my helmet). I could strip layers as I needed to, though I wound up not removing any for the entire ride.

From Arbor Lodge I rode along Interstate Avenue, taking the top deck of the Steel Bridge into downtown Portland.


On Interstate Avenue heading towards the Rose Quarter. The Broadway Bridge is in the background. 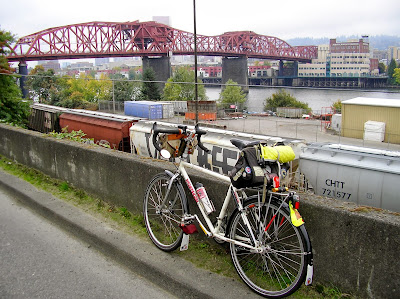 When I got downtown, I headed over to Saturday Market, Portland's craft marketplace that's been in operation since only a couple of years before I moved here in 1975. This summer, a friend gave me a beautiful pair of earrings, not knowing that I my ears were pretty much committed to piercings. But I loved them and wanted to find a way to wear them. So today, my goal was to see about having a jeweler convert one of the earrings into the centerpiece of a simple silver bracelet, and having a jump-ring installed on the other so I could wear it on a chain. I found what I was looking for on both counts.

Saturday Market is also known for some great cart-food, and it was basically impossible to resist when I walked past the perogie cart. 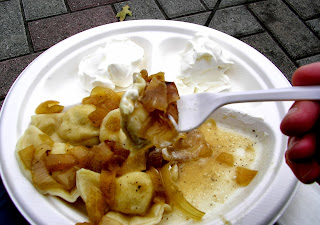 (Not kosher. Not vegan. Not worried.)


From there, I headed home, riding up NW Broadway to the Broadway Bridge, stopping along the way to take an evidence photo. 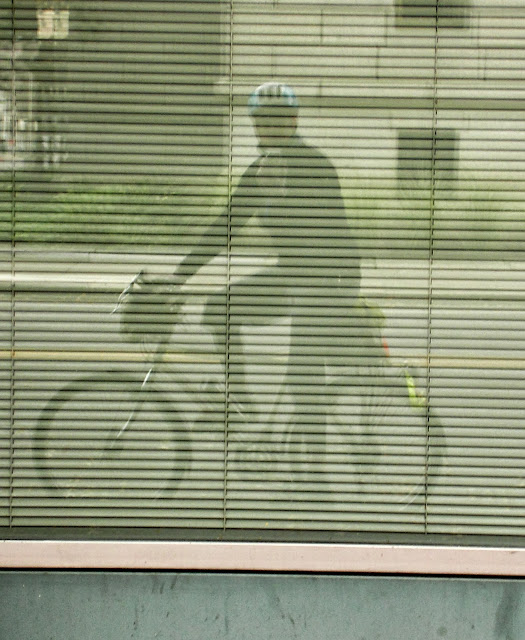 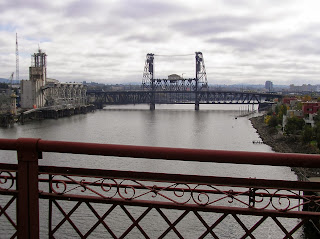 At left: the Steel Bridge, as seen from the Broadway Bridge. If you look very closely to the right side of the photo, you can just make out the little operator's tower of the Burnside Bridge behind it, in the background. Portland has 12 bridges spanning the Willamette River and each of them has its own look and history.


From there I made my way over to Northeast Williams Avenue and headed home. This was a little before noon, and as I turned onto Williams the sun began to burn through the clouds, and things warmed up quickly after that. Below: Pizza-a-go-go. The pizza's not bad; sadly, the waitrons do not serve it clad in knee-high go-go boots. 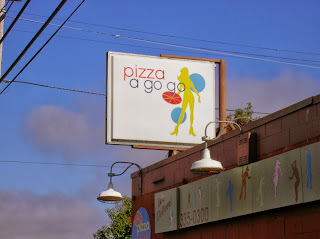 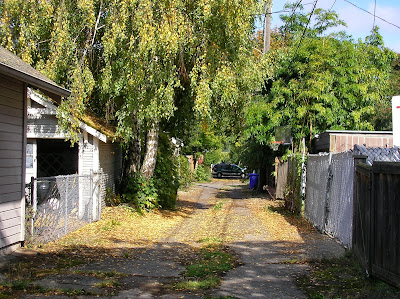 Northeast Portland has lots of little alleyways like this, some running all the way down to the Columbia Slough. This one goes all the way to Dekum (when a van isn't blocking the way...).

I love alleys like this, and other places of funky-ness that haven't yet been over-developed. I hope Portland will always have places like this in it.

More pictures from the ride can be found here: http://www.flickr.com/photos/bethness/with/10253680383/
Posted by bikelovejones at 1:30 PM