is the party over?

I've been seeing more and more of these auctions online: 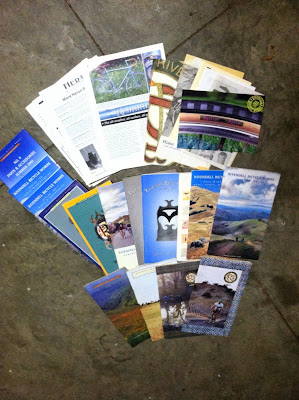 In the last year I've seen at least a dozen auctions on eBay of this nature: someone will take their stack of Rivendell Readers, catalogs and newsletters, bundle it all up, and sell the lot online.

I did the same thing myself a couple of years ago, when I could feel myself beginning to let go of many relics from twenty years in the bicycle industry and knew I needed to make space at home.

My collection sold for around 70 bucks at the time. Today's auctions aren't fetching quite as much money but they still sell.

But I have to wonder: is the party over at Rivendell?
When they came on the scene in late 1994, they were the only company doing what they did at the time. I was an early adopter and even bought a "lifetime"subscription to the Reader.

(Regular followers of Rivendell know that the "lifetime"-ness of that subscription has since run out, been revoked -- with the rationale that anyone who went that route has gotten their money's worth many times over by now and should not complain. Fine, but then don't call it "lifetime". My mailing labels used to say the expiration date of my subscription, which was sometime in 2098. No more. Whatever.)

Today there are dozens of companies copying the model in part or whole, offering waxed cotton and lugged steel coolness to an increasingly savvy clientele -- and many doing so at lower prices. Some of these companies -- Velo Orange, Zimbale, Acorn, Minnehaha/Banjo Brothers -- are so successful that they've actually cut into Rivendell's market share.  And Rivendell, while staying with its own sense of "tried-and-true" products, has been forced to shift its targeting over the years to a smaller core of enthusiasts with more disposable income.
In 2004, when Sweetie and I visited RHQ on a trip to California, I noted the language used in some of its marketing brochures at the time: Their bikes were affordable, it was written, by "anyone with a job and bicycle priorities".
I don't see that wording in any of Rivendell's literature today. Today Rivendell makes no apologies for selling goods made in the USA -- or for the higher prices involved in such a proposition. Has this driven customers away? Or at least, has it reduced the cultlike hype around Rivendell's approach?

Or has Rivendell simply experienced the passage of time like everything else?
Posted by bikelovejones at 11:02 AM