to count or not to count?

This summer I left off with tracking my mileage for several weeks. At the time I simply felt it was unnecessary to continue. But more recently, I have come to understand that my decision to stop tracking my miles may have had its roots in some emotional issues and stress that I had been carrying around all summer. Once I got at the root of my stress, I began looking at some of the things I'd neglected, and last week I pulled out my mileage log and began sorting it out.

Going based mostly on memory, a month spent riding back and forth short distances in another city, and other factors, I reassembled my best estimates of mileage for the remainder of the summer through the end of September. I decided not to agonize over the lack of accuracy -- after all, this whole thing was rooted in emotional stuff and I felt I could cut myself some slack for that -- and decided to add up what I'd estimated and call it good. I figure I'm not off by more than 10 to 20 miles or so anyway.

So as of October 5, I've ridden 1,372 miles this year. That is about 400 to 500 miles lower than my average of the last four years at this time; and does take into account the fact that there were large stretches of time this summer when I rode very little or not at all. It also takes into account the fact that I did not train or race at all this year. I am not pushing myself towards a numerical goal by year's-end. I suppose it would be nice to break 2,000 miles by the end of December but if I don't it won't be tragic or anything.

I am planning to reinstall my Huret cyclometer on the Surly this next week; and will look around for another Huret to install on he All-Rounder. I'd prefer not to mess with a computer again. 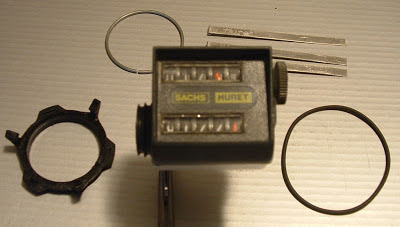 Posted by bikelovejones at 5:17 PM